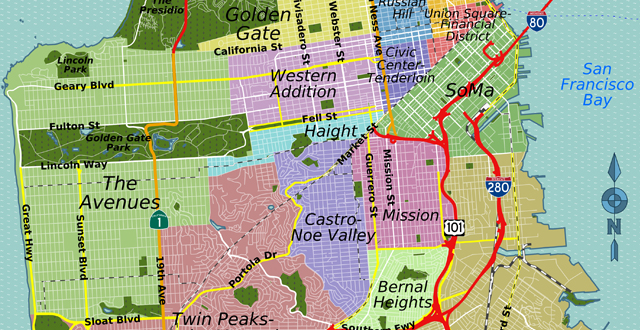 The Legacy Business list first became a thing in 2016 with 9 recipients gaining that title and its protections. In 2017, over 50 businesses that were considered of historical and/or cultural relevance were added to the list. While the list isn’t exactly a guarantee of survival for any business or a free ride, the status does offer some financial assistance and gives the rest of us some hope that our favorite local institutions will still be around in 2018 and beyond.

Some highlights include El Rio, DNA Lounge, and Elbo Room, Noriega Produce (one of the family-run locations owned by Konstantinos “Gus” Vardakastanis, the well-known local grocer who was tragically killed after a hit-and-run in the Bayview in September 2017), as well as Flax art & design which remade itself with two new locations, one in Oakland and one in Fort Mason, after its move from its beloved Market Street location back in 2016.

One surprising name on the list was BrainWash, the laundromat, cafe, and local comedy spot in the SoMA which had also gone out of business in 2017. Other puzzling additions included the touristy chain Boudin’s Bakery and Good Vibrations.

In a nutshell, here’s how the Legacy Business Program works:

A business is eligible for Legacy Business status if it’s been open for at least 30 years (although some exceptions to this rule are made), receives a nomination from the mayor or Board of Supervisors, and gets final approval from the Small Business Commission.

According to the San Francisco Office of Small Business, in 2015, voters agreed to create the Legacy Business Historic Preservation Fund, that would provide grants to both Legacy Business owners and property owners who agree to lease extensions with Legacy Business tenants. “It was the first legislation in the nation to recognize notable small businesses as historic assets and incentivize their preservation.”

“Through the Legacy Business Historic Preservation Fund, Legacy Businesses on the registry may receive Business Assistance Grants of $500 per full-time employee per year, while landlords who extend the leases of such businesses for at least 10 years may receive Rent Stabilization Grants of $4.50 per square foot of space leased per year. The business grants will be capped at $50,000 annually; the landlord grants will be capped at $22,500 a year.”

(Map of all the businesses added to the Legacy Business Registry.)

One Twenty For Hair
155 Main Street