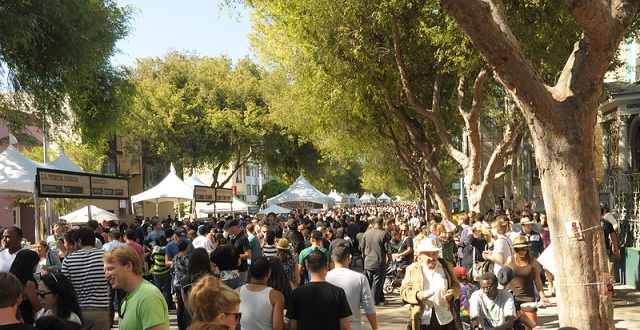 The full chef lineup for the seventh annual San Francisco Street Food Festival (SFSFF) has been announced, making its debut on August 15th and 16th at a new location in the Dogpatch with a diverse range of culinary talent gathering for a weekend celebrating food, community, and entrepreneurship.

After outgrowing it’s former Mission district location, SFSFF 2015 will now take place near Pier 70 from 11­–6pm and will feature 80 curated vendors for two days of amazing food, drinks and entertainment. New to this year is a live music component throughout the weekend, highlighting an array of local Bay Area bands and DJs. The increased offerings are a result of La Cocina’s new partnership with local organizations Noise Pop and The Midway to help develop the lineup and entertainment, helping take Steet Food Fest to the next level.

The Fest has also expanded to include two new elements to celebrate outdoor food around the globe: Islands and Chef’s Counters. The Islands will provide a culinary oasis devoted to a single quintessential element of the food world, based on the following themes: tacos, dumplings, and seafood. Each island will offer a multitude of choices from an array of chefs showcasing their unique take on each themes. With only twelve seats, Chef’s Counters will be there to give food enthusiasts a more leisurely and intimate experience. Chefs for both the Islands and Chef’s Counters will be announced soon.

Stay tuned for more updates about weekend entertainment and details about La Cocina’s Food & Entrepreneurship Conference in the coming weeks.