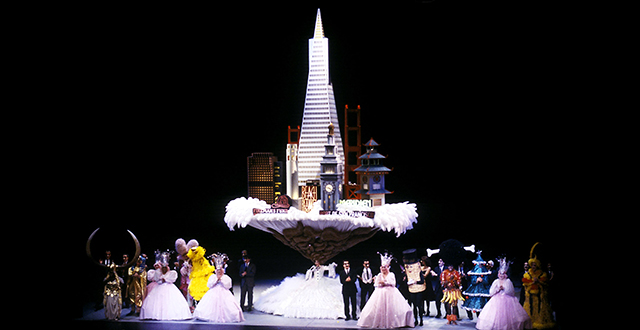 With a bit of shock, the news that Beach Blanket Babylon’s long run would end this year took a moment to register. It was kind of like hearing that Disneyland would be closing for good. I’d never considered any alternative; except that the show would always go on. It had a life of it’s own. Well, apparently, that’s not true. And as such, the beloved musical revue will give its final performances this New Year’s Eve.

There are now about 8 1/2 months worth of shows to get tickets. For those who’ve never been, let’s just say, yes, it is touristy and the parking is tough. But by giving us so much time to plan a date, there’s no reason why you wouldn’t want to enjoy a true San Francsico tradition one last time. It’s a classy way to bring their 45 year run to a close.

The premise hasn’t changed over the years… the audience follows Snow White’s wacky, hilarious journey around the world in search of her “Prince Charming.” Along the way she meets an ever-changing line-up of pop-culture characters, keeping the dialogue fresh & witty. Beach Blanket revels in it’s campy nature and the singing is first rate. Ironically enough, some might say it was a gimmick that made the show stand out and kept people coming back. Those hats… those massive hats… so crazy and huuuge; who knew pineapples made such great hats.

“Originally scheduled to run for only six weeks, the show became an international phenomenon and the quintessential San Francisco experience. I am thankful to our fans from around the world who have supported us from the very beginning. Our hats are off to each and every one of you!” – Schuman Silver