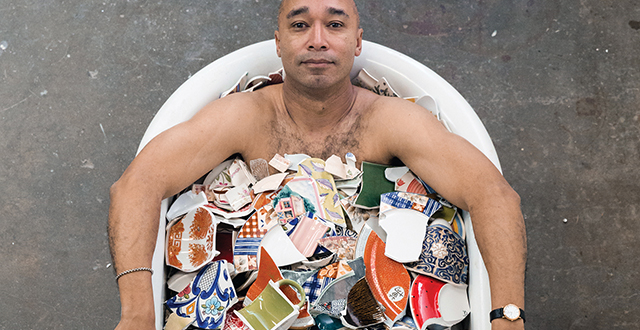 Artists have been borrowing resources to help formulate their works before there were words to really describe ‘art’ as a concept. These days, the number of objects that are manufactured only later to be discarded rival those found in the natural world.

Beginning Friday, January 20th, Recology’s Artist in Residence (AIR) Program will uncover the work of three artists who were granted untethered access to the Recology Center’s 47-acres of castaway materials to reinvent their own gallery exhibitions.

Over 100 artists apply each year and a panel selects three artists at a time who will be given studio space at Recology’s Visitacion Valley dump site to make their exhibition proposal a reality. The artists work over the next four months with the only requirement to be on-site a minimum of 20 hours and make three pieces of art for the company’s permanent collection.

Work by Anja Ulfeldt for her exhibition, “Beyond Repair”

Anja Ulfeldt, a kinetic sculptor who enlivens found materials with new functionality, said the program brought out the inner hoarder in her and she often found herself helping to sort items so they were more easily retrievable for collection services that would pick up usable goods for resale at thrift stores.

It also forced her to rethink projects in the future.

“It’s nice that I can just kind of borrow things and then if they don’t work out they can go back into the stream, that allows for a kind of freedom I don’t have normally,” she said. “It gave me a clear idea of how to be more resourceful and ways to reuse objects that maybe I just hadn’t thought of or maybe just wasn’t exposed to.”

Another significant component to the AIR Program is the interaction between working artists and the public, which is often equally split between youth and adult visiting tour groups. At times, participants will be called on for demonstrations of their process or to volunteer in some way or another.

During his residency, social practice artist Ramekon O’Arwisters continued Crochet Jam, which he does on the regular to engender free-form craft exploration, teaching children and adults to build intricate patterns starting with a single stitch. His exhibit “Smooth the Edges”, helped him to delve further into concepts of chaos bred from a fractured society.

With much of his practice revolving around facilitating calmness through meditation, it seems appropriate that O’Arwisters will be providing sanded shards of found objects to gift to attendees to remind them to always “smooth their sharp edges” as they travel through the world.

In addition to the six AIR artists chosen annually, one student artist is picked to work alongside residents. With “Dizz Mall”, Jinmei Chi rummages through mountains of dispensable purchases to construct new and nonsensical items. They’re then commercialized and presented in a darkly comical store-like setting that shows a sobering aftermath of what comes from our temporary attachment to items that are eventually just throw away.

Recology has been in operation for over two decades as a private company with a history of civic engagement and a predisposition for environmental activism through its education, volunteer and art programs. Since AIR began in 1990, many of its residents have gone on to work with Recology in some capacity after the program and their works continue to be shown across the Bay in off-site exhibitions that promote recycling and reuse.

AIR Manager Deborah Munk said this has been key to its success over the years. “It’s like another arm and we have many ways we reach out to the public, with tours and community groups…it’s just another way to get folks to understand,” she said. “If artists can sell their art, that’s great, but what’s really important is to give back to the community.”

Anja Ulfeldt in her studio space at Recology

The current exhibition reception will take place from 5-8pm on Friday, January 20th and on Saturday January 21, from 11am-1pm, with additional viewing and a gallery walk-through by the artists on Tuesday 24th from 5-7pm.

To learn more about the AIR Program and the work Recology does, visit their site here.

OCT 14 Art Weekend Sausalito at Sausalito Center For The Arts