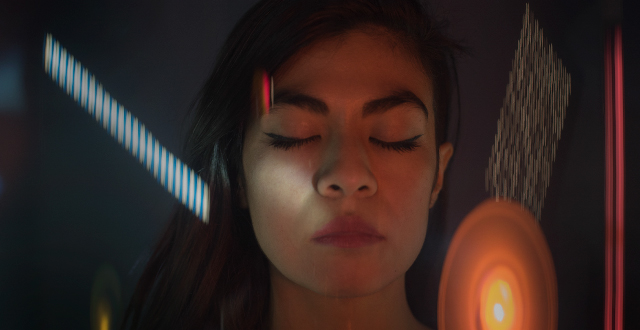 Recology San Francisco will host a series of gallery openings beginning this Friday, January 22, from 5-10pm to showcase work from artists in its selective Artists in Residence (AIR) Program using items that ended up in the trash.

Recology’s AIR program has been operating for over 15 years. Started by Jo Hanson, a former artist and educator, it’s hosted over 100 artists since then who have been given 24-hour access to its equipment and studio spaces – all with the hope that it would inspire others to become better at recycling.

It has churned out the likes of many artists who became notable for their work there, such as Nathaniel Stookey with “Junkestra”, a symphony composed of instruments created during AIR, which later went on to debut at The San Francisco Symphony in 2010.

Actors perform readings in Jeremiah Barber’s “Make Me Change Me”

Over the course of four months, Jeremiah Barber, Alison Pebworth and student artist Robb Godshaw scoured Recology’s “dump” in search of everything from soft fabrics and plastics, to wooden construction remnants and metal, that might help configure their body of work.

If one man’s trash is another man’s treasure these artists had struck proverbial gold. With a singular mission to use discarded natural resources in ways that might educate and inspire, the artists rummaged daily. Through stacks of leftover materials and found objects they couldn’t believe what had been thrown into what now looked like a demolition site.

Barber, a visual artist with an attraction to Kafka, mythology and the impermanence of man, felt somewhat overwhelmed at first, but slowly began to build a vision around the contradictions present in the pieces he found.

“It just happens again and again—sometimes you find what you’re looking for and sometimes you just find something and you can’t explain your attraction to it and you just have to follow that,” said Barber.

After standing witness to one of the most bizarre drop-offs of a mysterious bright red powder, made by a cattle feed tracer disposing of a food mix that had been measured wrong, Barber knew the strange substance would have to be involved somehow.

One of Barber’s performances, which involves both professional and novice actors reading poems pieced together from random articles and scratch paper, now includes a red rain shower leading up to its finale.

It’s not a wholly novel idea for artists to use what might otherwise be considered garbage for own creative reuse. Pebworth remembers going on “dumpster diving” expeditions with her father, who also liked to make things, and to uncover ditched trinkets when she was growing up.

“I just started making all these pieces with different kinds of wood in many different forms and then I started thinking about how we take that for granted in a place where things are really abundant,” said Penworth. “There are different cultures where things aren’t made of wood and that’s such a great commodity.”

During her residency, Pebworth found enough cuttings of wood she could have built an entire set of Victorian-era furniture. Fueled by her interest in archaeology and the anthropological elements present in her findings, she envisioned a series evocative of 18th century Cabinets of Curiosity or Wonder Cabinets (Wunderkammer in German) where people would flaunt odd possessions.

“I always had this fascination with it in the way that people displayed it, like it was provoking this sense of wonder of the world,” said Pebworth. “In this era, the way things were displayed was not purely scientific—there was also something metaphysical about the way you viewed the world.”

Alison Pebworth in the studio cutting wood for her wonder cabinets

It also encouraged her to think differently about the things she may own or create over time. “It’s kind of sad but it really makes u think of your own mortality and the things you hold precious and hold onto and you might die and if nobody is there to care about it then its just going to go to the dump,” she said.

By marrying the wood remnants together, Pebworth successfully built her own anthology of cabinets that would open to showcase photographs of strange families or beautiful, but nameless, paintings that resonated with her.

Unlike many residency programs, AIR facilitates an exchange that’s somewhat unconventional. Artists generally expect to give presentations and participate in creative workshops, but here, they also play tour guide to visiting groups of foreign exchange groups, business professionals and even elementary-aged students.

Barber, who was first motivated by the sustainable sculpture work of Terry Berlier, a former artist-in-residence at Recology, was sometimes jolted by the interactions he had. At one point, a third grader posed the question ‘what does it mean’ of his work in progress and he was so surprised at the depth of his understanding he couldn’t stop rambling over an answer.

This chance to have a feedback loop during production was another element of the AIR program Barber found indispensable.

“There’s really nothing like this program in terms of what you’re dealing with,” Barber said. “It’s also so astounding the kinds of things you find in the process of pulling materials out of an never-ending waste stream knowing that whatever you do with them, they can always go back into that waste stream.”

While some consider Waste Management the end-all of trash disposal, Recology’s Transfer Station and Recycling Center is actually the central hub for secondhand materials that fall outside what is commonly considered garbage. The materials at the dump site are later sorted to determine actual waste from recycled materials and in many instances end up back at local thrift stores.

While the artists have permanent digging rights to the treasure troves at Recology, the public does not enjoy the same luxury. That’s why its Deborah Munk, the director of the AIR program, who stresses allowing people to tour the site to be able to understand the life of the objects they purchase and dispose of.

“I think we’ve changed how people look at trash,” said Munk. “It’s really about bringing awareness to the importance of recycling and reuse… putting the right thing in the right bin and making substantial changes in their lives by buying different things or driving different cars.”

While Recology was the first national program of its kind, it has also gone on to spark the addition of GLEAN, a waste reuse program in Portland, Oregon with similar artistic aspirations, and future plans are set for both Los Angeles and Seattle.

Artists Barber, Pebworth and Godshaw will be showing their work at Recology on Friday, January 22, from 5-10pm and Saturday, January 23, from 1-3pm. Additional viewing hours will be held on Tuesday, January 26, from 5-7pm, with a gallery walk-through with the artists at 6:00pm.

Find more information on the Recology showings and directions to the site here.

JUL 01 Hello To A Calm Place: Meditation in 3 Minutes a Day at Online - Virtual Event