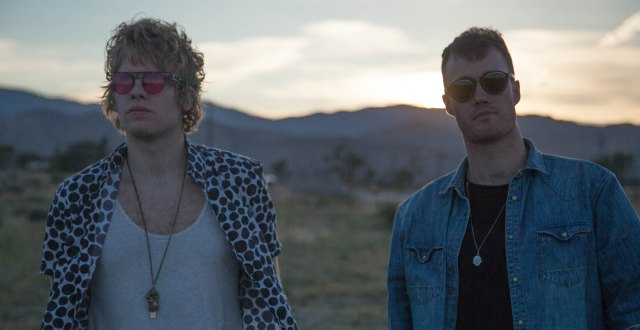 Canadian electronic duo Bob Moses (aka Tom Howie and Jimmy Vallance) dropped their debut album Days Gone By last year and have been gaining critical acclaim from the masses ever since.

The record, highlighted by their hit track “Tearing Me Up,” also saw a special edition release a few months back, titled Days Gone By (Never Enough Edition). This new album also includes bonus tracks and remixes by A-Trak, Tale Of Us, and RAC, among others.

After playing at Coachella back in the spring, Bob Moses has been cruising North America for their largest string of shows here in the states, to date. They’ve also been seen on festival lineups throughout the country, including Austin City Limits, Life Is Beautiful, and Voodoo Festival. Fortunately, they conclude live dates for the year with a show this Saturday, November 5 at the Fox Theater in Oakland.

To preview their upcoming Bay Area stop, we spoke to Jimmy and Tom to learn more about their early days, hear what makes Burning Man special, and learn what they love about coming to San Francisco.

Growing up in Canada, can you describe your musical upbringing and influences?

Tom: For me, it was Elton John, the Beatles, The [Rolling] Stones, and that sort of stuff–like you start listening to your parents’ records. I also got heavily into California punk as a kid…pop punk, sort of.

Jimmy: Everything on the radio in Vancouver was basically rock and alternative rock. Everything from Collective Soul, Nine Inch Nails, Blink-182, Puddle of Mud. I used to love that stuff when it came out. All that stuff.

Tom: We basically listened to one or two radio stations on and on and on. We were both sort of into alternative rock when we were younger. That was what we were fed by the powers that be, as young kids in Vancouver.

And Vancouver has a very specific radio vibe. It’s quite alternative. Now it’s very indie. There’s a lot of Canadian bands that get played. It’s a very LA, very Seattle sort of vibe to the radio. Not so much East Coast urban stuff. Now it’s more that way because it’s bigger.

How did you pursue the path to make electronic music and originally form Bob Moses?

Jimmy: We were always fans of different electronic records. Growing up, I like Massive Attack and Moby and things like that. When I found out one person could do it on a computer, I kind of decided [to pursue it]. I was in a band at the time and they didn’t want to work as hard as me. I said great, I can make it all on my own.

After Vancouver, when Tom and I connected in New York, he was in a band and felt that he was leading the creative charge. We were deep into electronic records and we dove into the deep house scene together and fell in love with that. It was a modern way you could do music. The sounds you can make were really inspiring to us–like you can make a guitar sound different. The possibilities are kind of endless. A drum kit doesn’t have to be a drum kit. You can take some bits of a drum kit and sounds of someone kicking a ball and make it sound really cool.

What would you say are each other’s musical strengths?

Tom: Jimmy has a very vast amount of knowledge. He’s got an encyclopedic knowledge of most things. Some of which will surprise you, but also music specifically. He’s a great songwriter and great producer. He’s good at identifying what’s good and what’s not good. Making musical decisions I would say is one of his main strengths. He’s also very good at all things technical. He’s very interested in that side of things. I’m interested in it but not nearly as much as Jimmy. I’m interested in it enough to use it to produce and write so it’s nice to have that in a partner. If I can get something sounding good, then he can take it the rest of the way. He’s a good piano player and a great drum programmer.

Jimmy: Tom’s very pretty. Just kidding! Tom is an amazing guitar player. A really awesome melody writer. A good wordsmith. He just comes up with things. Pulls them out of thin air and it ends up becoming a song. He can pull a sentence that ends up becoming a perfect chord, which is crazy. He’s really good at writing songs. Tom has a really strong sixth sense of where songs come from. He’s good at listening to them and letting those ideas get filtered in an impressive way. He just stands out of the way and lets the song become a song. Overall it’s just a really cool relationship and we have a great dynamic.

Did you attend Burning Man this year?

What is your fondest memory from prior Burning Man festivals?

Tom: Ooooh, just playing. The first time we were there, it was more uncomfortable and scary. We made a decision last minute and we slept basically on the dirt. It was kind of miserable but you’re still very glad you did it in the end. My favorite memory was last year, coming back after two years, and seeing that first set on Robot Heart [in 2013]. Being embraced by people and being able to play great slots [was] really nice. Specifically, we played on the Robot Heart bus, and by 2015, they are kind of [became] our Burning Man family so to say. I would say there’s a strong bond between Bob Moses and Burning Man, and specifically Bob Moses and Robot Heart. It was almost like a Burning Man homecoming.

Jimmy: Oh man, last time we were there we spent a couple days. I used to go to this cafe every morning and have breakfast. It was awesome great vibes. Walking down this massive hill and seeing the water. The weather there is great. It’s kind of like Vancouver–it never gets too hot. It also has this California thing going on where the sun is always shining…I think I’ve seen Mrs. Doubtfire too many times. I’m just kind of nostalgic about San Francisco. Everything about it is awesome.

Tom: I love all the hills. It’s a beautiful city. I love the ocean. I really like the people a lot. I feel like the people there are very open-minded and friendly. Everybody is pretty happy there. I’ve always really liked San Francisco. I expect to be living there at some point if that ever came across my plate. It is one of the first places we played after New York, when we got enough money to pay for our flights and sleep on somebody’s floor. The vibe of San Francisco speaks to the vibe of our music–a lot of our early adopters, so to speak, live in San Francisco.