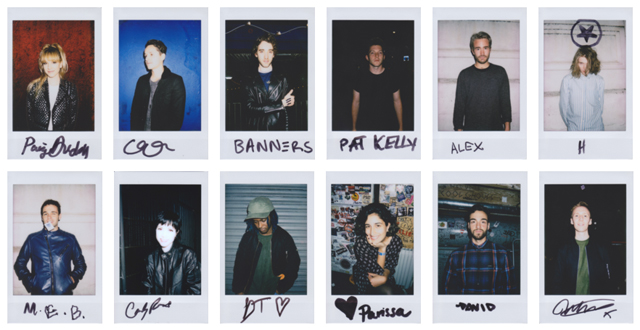 There we were, sitting at a cafe as I sipped my iced caramel latte on this warm fine day in San Francisco. I took a quick glance at my watch-I didn’t even realize time had gone by so quickly. I met up with SF-based Isa Grassi, an illustrator, fine arts grad, and founder of The Polaroid Project. Isa created the analog series two years ago and has since accumulated hundreds of polaroids from  live shows. The ever-growing collection of photographs is her tribute to her deep love of music. The photographs have a nostalgia to them—like they have captured some part of history—one that’s still in the process of being made.

How did The Polaroid Project start?
I love music and it plays a vital role in my life—everything is connected to it, even though I don’t personally make music myself. The Polaroid Project is my own way of showing my appreciation, respect, and thanks towards people who make music, while also documenting a time and place in history. I try to capture their human qualities because I want everyone to recognize and love these individuals who devote their lives to creating music, to see past them as public figures. To also remember that they are regular people, just like you and me which tends to be forgotten

What made you pick up your polaroid camera and decide this was going to be an ongoing project?
I have always wanted to take photos of musicians and artists in a polaroid format. I just had a good feeling that night at the London Grammar show, that would be the starting. At the time, I didn’t even own a polaroid camera so I decided to borrow one of my friends, but instead it wasted the new pack of film completely. I was totally bummed. I guessed it was not my time then to start this project. Later that night, my friend actually went to the Mission and got me the current polaroid camera that I have now—just so I could shoot that night.

What were your favorite experiences when going out in creating this?
Photographing these people and getting a glimpse into their minds is the part that I truly enjoy the most. Getting to talk about music and making jokes, just being normal people around normal people, is what makes this whole experience memorable. Honestly, it’s really hard for me to pick a favorite experience because each artist I’ve met has been totally different. Although I do have to admit there were a couple bad experiences. Some of the artists that I have scheduled to meet up with were either really completely drunk, forgot our scheduled meetings, or had stood me up completely. Other than that, most of them so far it’s been really great.

How do you prepare before heading out to an event?
My main essentials are, of course, my polaroid camera! Polaroid Films, a sharpie, my phone and my wallet.

Who is your dream collaboration for this project?
I want and wish I could shoot A$AP ROCKY. I was really close to shooting Drake when he came down here to perform but I guess it wasn’t meant to be. Apparently his show the next day was cancelled so right after his show ended, he left for his next flight to Canada just so he could visit and spend time with his mum. I thought that was adorable. I couldn’t even get mad at the situation but that was that. I guess it wasn’t meant to be. Maybe sometime in the future.

Do you get recognized a lot when you’re out working?
I’ve been approached by people before. Like once, someone would come up to me at Treasure Island Music Festival and asked me if I was The Polaroid Project? ‘I was like what? How do you know?’ [laughs] I have also read about the project second-hand via social media. It’s cool to see people getting into the project!

What are your plans for The Polaroid Project?
I plan to start a Periscope account so I can start documenting real-time events. I’ve always been interested in radio broadcasting and I guess, just talking about music. I’m not so sure if people would be into it, ya know? But that is something I have been thinking about. I’m not so sure on when or how I want to tackle video elements, as it’s very different from still-life photography. Creating small “Behind the scenes” videos would be cool but I think I need to establish TPP first and then actually have a crew [to support on these type projects.] I’ve been working on everything by myself. Things are starting to kick off though and I’m just trying to process it all.

“You can buy art because you think it’s pretty or maybe because it’s cool but if you buy it because it speaks to you then you just created a relationship with it. It instantly becomes more meaningful. That’s my approach to art.” – Isa Grassi