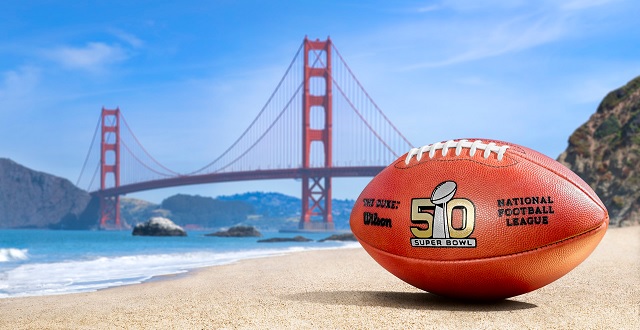 The Super Bowl is the biggest sporting event in the U.S., averaging more than 110 million viewers. This year will be the first Super Bowl held in the San Francisco Bay Area since Super Bowl XIX in January 1985 when Hall of Fame coach Bill Walsh, MVP quarterback Joe Montana, and the San Francisco 49ers defeated Dan Marino and the Miami Dolphins. These are just a few of the interesting details about the Super Bowl.

To get football fans excited about the upcoming game on February 7, we put together a list of 20 interesting facts about Super Bowl 50. From ticket prices and traffic to the stadium’s natural turf and the technologically advanced television broadcast, there are many noteworthy characteristics of Super Bowl 50 worth sharing.

Hopefully the game and logistics go smoothly, and we don’t get a repeat of last year’s match up and outcome. Be sure to also check out our Super Bowl 50 Events Guide for fun activities happening in SF. Don’t forget that the game kicks off at approximately 3:30pm on Sunday and can be watched online on CBS’s website.

2) Only around 7,000 Super Bowl tickets are available to the general public.

3) 300 food trucks and more than 50 food carts have been licensed by the city of San Francisco to take advantage of the huge Super Bowl crowds.

4) 10 special Super Bowl 50 sculptures weighing 1,600 pounds will be placed around the Bay Area to promote the game. The sculptures are self-powered and light up. One of them has been installed in Alamo Square Park featuring the number 50 with replica Super Bowl rings and giant gold numbers. Sadly, it has already been vandalized.

5) It takes 75,000 square feet of turf grass to cover the entire Levi’s Stadium.

7) The Super Bowl still uses paper tickets even though many large events are choosing to go digital. The NFL says that their tickets use “holograms, custom laser cutouts, thermachromic ink and a specially made gloss varnish.”

8) Super Bowl ticket prices on the secondary market historically go down about 40% between the season’s beginning and Super Bowl weekend. The cheapest available ticket for Super Bowl 50 is expected to cost at least $3,500 just to get in the stadium.

9) Super Bowl 50 has been labeled the Golden Super Bowl for three reasons: because it will be located in California (the Golden State state), it will take place in the home stadium of the San Francisco 49ers (a team named after the California Gold Rush miners), and because a 50th anniversary is traditionally called the “golden anniversary.”

10) CBS has sold out all Super Bowl 50 advertising spots by now with 30 seconds spots averaging a record $5 million.

12) The Super Bowl 50 Host Committee has vowed to be “the most giving Super Bowl ever” and will dedicate 25% of all money it raises for philanthropic causes in the Bay Area. The committee created the 50 fund as its philanthropic initiative and focuses on providing grants to aid with youth development, community investment and sustainable environments.

13) Air traffic at Contra Costa Airports expected to increase during the Super Bowl 50, expecting up to 1,200 extra jets in the Bay Area between February 4 and February 10.

14) A maximum of 12,000 passengers will ride VTA to Levi’s on Super Bowl Sunday, a controlled number because people must buy their passes in advance (costing $20 and already on sale at VTA’s website) and must show their Super Bowl game ticket before being permitted to board one of the special SB50 trains. A combination fare for riding CalTrain from San Francisco and transferring to VTA in Mountain View will cost $40.

15) A few one-of-a-kind footballs have been created with the Council of Fashion Designers of American along with celebrity and player signed footballs available for auction online and at special events during the week.

16) The Super Bowl 50 game broadcast will utilize 70 cameras. CBS will also use Pylon Cam technology and audio with eight high-resolution, high-definition, point-of-view cameras housed inside the pylons also that have microphones embedded in them to enhance the natural sound of the game.

17) The game will also use an enhanced replay system consisting of 36 cameras strung around the upper deck of Levi’s Stadium called Eyevision 360, giving viewers a 360-degree perspective and higher resolution than previously ever seen for the game. The new technology could even influence the game, as game officials can use any replays a network shows when they review a play.

19) San Francisco will have road closures for three weeks during Super Bowl festivities. No one will be able to drive during the three weeks starting January 23 through February 12 in the following areas.

20) San Francisco will not receive any reimbursement for hosting Super Bowl festivities (except for the Recreation and Park Department and the Fire Department who will receive an estimated $104,257). The Super Bowl 50 Host Committee is pledging $500,000 if San Francisco’s costs soar above $4 million.

OCT 28 The Chainsmokers at Greek Theatre