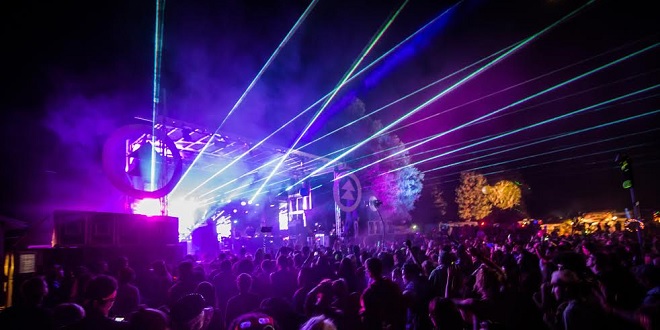 Most music festivals emphasize a go crazy approach without considering the impact of hosting their large-scale party. With heightened public intelligence toward the ecosystem and the California drought posing real threat, it makes complete sense for outdoor festivals to use their community advocates to promote mindful use of natural spaces and spread awareness about sustainable living.

The Northern Nights campground, which is situated about three and a half hours north of SF on the South Fork Eel River close to the Humboldt and Mendocino county border, has been a hot spot for many acclaimed music festivals like Reggae on the River and other renowned talents for the past 20 years.

Northern Nights returns to this special place for its third year with an all-star lineup plus tons of alternative festival activities like sustainable workshops, yoga, organic food, and not-for-profit vendors, enabling attendees to fully embrace a truly California experience.

We spoke to festival directors Andrew Blap and Peter Huson about the origins of Northern Nights and expectations for this year’s event. In addition, we had a special conversation with headliner and Oakland resident The Polish Ambassador, who previously topped the lineup at the inaugural Northern Nights back in 2013, about his involvement with sustainable festival activities and his plans for the future.

How did you get the idea to start Northern Nights?

NN: BLAP has been getting our friends and a mobile sound system together for years – yachts on the Bay, Tahoe beaches, rafts on the river or out at Dolores Park. We were sitting outside on the Panhandle in the city, just after pulling off our first mini-festival – b2b2b Snowglobe after-parties over New Year’s in South Shore and starting reminiscing (as we often did) about bringing our parties back to the Redwoods.

We are all Reggae on the River vets, and left our hearts on the banks of the Eel River [a few years ago]. A couple days later we got in the car, drove North on Highway 101 until we got to the County Line, and we started knocking on doors (which we found it later isn’t always the best idea) but nevertheless we found the owners of Cook’s Valley and here we are three and a half years later.

How would you say the festival has evolved over the years?

It’s a three year old right now that just finished its terrible twos. Year one we only had 40 days between when we announced the event and put tickets on sale and weren’t allowed to have a river stage. That year was all about just proving to ourselves we could pull it off, and then the team that came together in order to do so. Year two was about developing a festival planning system, and somehow getting enough people there. This year we’ll be perfecting the system and focusing on highlighting the natural environment.

What is unique about this year’s festival compared to previous efforts?

We have a lot more space this year and expecting more people, so preparing for many more surprises! We are pushing on more live music, will be flying in a VOID Line Array this year, have a later curfew, put a lot of energy into enhancing the VIP and overall general public’s UX (user experience) with shade, showers and comfort. That’s Southern Hospitality at Northern Nights! We will be unveiling the NNMF Kitchen!

What sustainable activities will be taking place during Northern Nights?

We will be hosting a real awesome group of local non-profit and environmental organizations in our NPO Community Carnival, including The Bioneers, EPIC, Healthy Planet US, KMUD and many more.

We will be working with Jumpsuit Records alongside The Southern Humboldt Community Park & the Eel River Clean Project on the Polish Ambassador Action DAY, and working with the Presidio Graduate School, University of San Francisco and Humboldt State on projects ranging from economic impact report, live streaming and broadcasting to waste management initiatives.

Do you have sustainability goals for Northern Nights in the future?

The goal is lay down the foundation in order for NN to stay around for many years to come. Take more measurements, invest a little more to do it with the right materials, and document everything!

We also chatted with The Polish Ambassador about his project’s beginnings, the California drought, and upcoming new material.

How was The Polish Ambassador project first created in Chicago and San Francisco?

TPA: Music was my creative outlet in Chicago. I was working in a post­-production department that was doing advertising for shows like Ellen and Oprah, and such ­- it was horrible. I was so dissatisfied with what I was doing in the very sterile audio world that I had to have this creative outlet in the audio world that wasn’t so sterile. That’s how the musical portion of Polish Ambassador came about, as a result of being deeply dissatisfied with one situation and having that throw me in this other direction of creativity.

The reason I say that it was birthed in Chicago and San Francisco is because I put out my first two, maybe three albums in Chicago but I never actually performed a live show. It wasn’t until I went to the Bay Area that the project caught enough reaction for me to start performing live. So I got my production legs in Chicago and I got my performance legs in San Francisco.

What would you say is your biggest accomplishment so far in 2015?

Yes, we are putting one together with Northern Nights!

It’s been really great seeing the Action Days gain traction in all these various ways with festivals. We’ve been really excited about everyone’s enthusiastic response to actually coming out and making an impact when we get together to celebrate.

What are you thoughts about the California drought?

There are so many different theories from different people, some saying climate change, others saying that it’s a natural cycle that happens. Historically, California has gone through droughts at various times, and other parts of the world have done the same. There’s also the observation that such a vast amount of America’s produce is being farmed in California and produce takes water, resulting in us effectively shipping our water across the country and not having enough left to circulate in the way we would need to maintain the normal levels.

When something like this occurs there is an amazing opportunity for us as community to figure out how we can be more resilient and to acknowledge that there isn’t as much water here right now and we need to figure out what to do. Let’s learn and let’s teach ourselves how to act in these situations because these are things that we should know as human beings on this planet. Let’s build ponds and use other water retention techniques, let’s teach more courses about water resiliency and educate people on how to preserve our water through methods such as gray water and drought tolerant landscaping. It’s really a huge opportunity for creativity.

I don’t know why it’s happening but let’s use this time to learn how to create with the earth in whatever current state it may be in.

How did the final product turn out for your Pushing Through The Pavement remix album?

The remix album ended up having 12 tracks on it and I’m stoked on all of them. You can check out all the tracks on my BandCamp page and download them for free.

When might we expect The Polish Ambassador’s next original release?

We’re putting the final touches on it right now and planning to bring it out this fall. It builds on Pushing Through The Pavement and I’m collaborating with some artists that I’m really excited about.