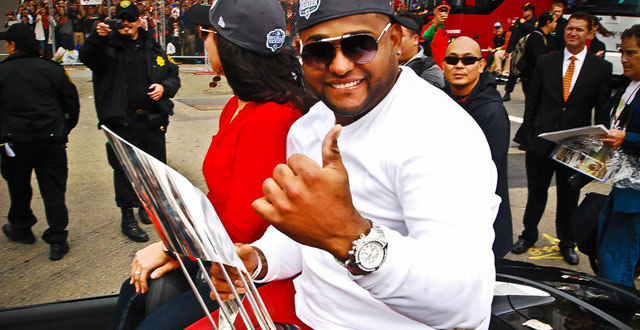 The news that many Giants fans were dreading has reportedly arrived—the team’s star third baseman Pablo Sandoval is leaving San Francisco after deciding to sign a five-year contract with the Boston Red Sox worth nearly $100 million, according to several online reports.

The Venezuelan switch hitter, two-time All-Star and 2012 World Series MVP has been a fixture on the Giants’ roster since his major league debut in 2008. It wasn’t always roses with the Sandoval, who was prone to slumps and weight issues, but the Kung Fu Panda always seemed to be there for the team at clutch moments.

His gaming-winning pop fly catch in Game seven of the World Series this year was his last play with the Giants, and fans are not likely to forget his three home-run performance in Game 1 of the 2012 World Series.

Pablo Sandoval with the Giants:

2002-2007: Minor League Sandoval
Pablo Sandoval has always been a unique athlete, teaching himself at age nine how to throw a baseball with both his right and left hands. He signed a minor league contract with the San Francisco Giants in 2002 and began his pro career as a catcher.

Sandoval developed through the Giants’ minor league system while playing multiple positions: first base, third base and catcher. In 2007, Sandoval played catcher and first base for the San Jose Giants, helping that team win the California League championship.

2008-2009: Kung Fu Panda’s Debut
Sandoval was called up to the Majors in August 2008 and by September, he already had a nickname. Teammate and starting pitcher Barry Zito called Sandoval the Kung Fu Panda after the chunky third baseman scored a run in acrobatic fashion against the rival Los Angeles Dodgers. Sandoval jumped over the tag of the catcher, securing the victory for Zito and the Giants.

The 2009 season saw Sandoval settle in as the Giants starting third baseman, with no appearances as catcher and only occasionally at first base. He finished second in All-Star balloting in his first full major league season. Sandoval’s early days were marked by his free swinging tendencies, characterizing his own approach as “See ball, swing.”

2010: Heavy Panda Stumbles
Before the season started, the Giants asked Sandoval to work on losing weight, which backfired with a sophomore slump. Overweight and unproductive, heavy Panda was benched by Giants manager Bruce Bochy during the playoffs and had only three at-bats in the World Series.

2011: Operation Panda
The Giants pressured Sandoval through a highly publicized campaign dubbed “Operation Panda” to help him get into better shape. The plan worked like a charm, Sandoval lost more than 30 pounds, and his on-field performance improved.

Sandoval was selected to the National League (NL) All-Star team, becoming the first All-Star position player for the Giants since Barry Bonds in 2007. In his first All-Star at-bat, Sandoval hit an RBI double, helping the National League (NL) win the 2011 MLB All-Star Game. Nevertheless, the Giants missed the playoffs despite leading the league in 9th inning comebacks, but their championship swagger would return soon.

2012: Panda Mania & World Series MVP
Sandoval’s best season was 2012 when Panda Mania exploded in San Francisco. He was voted National League All Star and hit the first bases-loaded triple in the history of All Star game off of reigning American League Cy Young Award winner, Justin Verlander. Fueled by Panda power, the Giants made a miraculously run to the 2012 World Series, winning in comeback style against the Cincinnati Reds and the St. Louis Cardinals.

2013: Chunky Panda Returns
The Giants followed up their championship with another odd year dud, missing the playoffs in 2013. The lone bright spot for Sandoval that season was a three home run game against San Diego Padres in September.

With that performance, Sandoval became just the sixth player in MLB history to have three-homer games in both the regular season and the playoffs. To much dismay, “Operation Panda” did not stick and by the end of the season, Sandoval again needed to slim down.

Panda had an impressive 2014 season, finishing second in the Gold Glove voting for his superior defense despite his stout build. Sandoval’s bat stayed hot during the postseason and his team made another improbable run to the World Series. He caught the final out of game seven against the Kansas City Royals, clinching an SF Giants dynasty with a third title in a five-year span.

The image of Pablo falling down after catching the final out in foul territory as teammates mobbed him will be a forever-lasting memory for Giants and Panda fans alike.