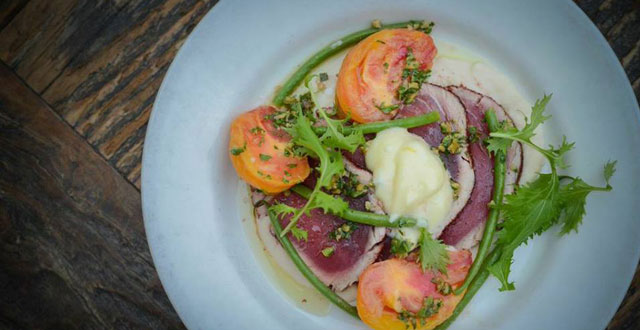 Celebrated San Francisco restaurant Foreign Cinema, one of the first eateries of its kind to open in the Mission, celebrates its 15th year anniversary this week with the special event, Quintessentially Quixotic Quinceañera.

The party on Thursday promises an evening filled with Latin food (a slight detour from the restaurants regular Mediterranean and Californian inspired cuisine) and signature cocktails, with a burlesque show and other entertainment led by emcee Heklina of San Francisco’s Tranny Shack.

All proceeds of the event will benefit LYRIC, a San Francisco LGBT youth organization, and the Harvey Milk Civil Rights Academy, a local public school with a mission to empower students by teaching acceptance, nonviolence and awareness.

We spoke with owner/chef Gayle Pirie about the event and Foreign Cinema’s 15-year history.

Since 2001 there has been great improvements in the street condition and the amount of destination travelers who want a taste of this unique area. There is also an explosion of restaurants and there are a lot of changing residents. I am sad about losing a few families along the way.

I get a little nervous when things are too successful because you don’t want to displace the amazing people that make up the fabric of the neighborhood. I want it to remain funky and bohemian because that is the San Francisco I grew up in. If it gets a little too glossy and shiny I get nervous—it makes me uneasy.

What was your inspiration for completely revamping Foreign Cinema after you and John took ownership?

We had dinner here and thought it was a really beautiful place. The inspiration itself was the pure geography of the building. John and I thought it was very special. We wanted to give it a special daily changing menu that reflects the seasons. We wanted to be spontaneous but also give the place a good infrastructure. That meant revamping the food a little bit, bringing in a more diverse selection of oysters and a bigger selection of main courses.

You are celebrating 15 years at Foreign Cinema this September. How did you go about picking the Quinceañera theme?

Well, it was about four years ago when one of my line cooks needed the day off for her sister’s Quinceañera. I asked about the Quinceañera and she explained to me that it is very special and cultural. That was the inspiration.

We have planned it as wonderful and flamboyant and meaningful as possible. Our Quinceañera has definite Latin flavors in terms of food and a little bit of the entertainment.

How did you connect with Heklina of San Francisco’s Tranny Shack to MC the event?

We picked our charity LYRIC because they help kids get off the street and they provide resources with vital training and support for kids and anyone who has been rejected by their families or their social peers for whatever reason. People in need could use LYRIC for what ever way they need to with certain issues they may not be able to find anywhere else.

We felt committed to LYRIC and also a public school called The Harvey Milk Civil Rights Academy, a school in need with a curriculum of non-violence, tolerance and acceptance. They are doing great work, so John and I thought, let’s help this school.

Heklina is a wonderful face of this community who we thought would help get the word out and also gather steam and interest. We will have the most amazing women and men in their Quinceañera gear celebrating this girl turning 15. Heklina has been a great force for the night and she has helped to reach a lot of San Franciscans.

How did you come up with the idea of playing films at the restaurant and how do you choose what films you play?

Well, we were lucky in that Foreign Cinema was running films when we got here. The space was five different retail spaces that were developed into one. The idea behind the films was inspired by the beautiful white wall in the back courtyard. Founding partners John and Julia looked at that space and thought oh, film! They started the whole thing. They wanted to show beautiful films and serve drinks. The food came in the equation later on.

The idea was to make it all feel seamless and make the place a completely sensual experience from the wonderful smells coming from out of the kitchen to the glow of the patio and the films playing on the wall.

Bryan Ranere has picked our films for over a decade. He is a film buff and filmmaker. It is very tricky because the world is not a 35mm world. Every film schedule is a true triumph because it has taken a ton of waiting and chasing down a particular film. The whole world is changing to digital so it is a real achievement to come here and see a 35mm on a big reel. We really feel good about that.

How long does it take to create a menu at Foreign Cinema?

I would say we each have our own process but there is a core of symmetry there. You are responding to what the farmers brought, the weather and what is left that we need to use that is beautiful. There might not be a complete overhaul of a menu but rather a improvisation from day to day.

We always have two sustainable fish options, a vegetarian main course and always a soup. There are these slots to be filled and you want everything to come together kind of like a poem. It all has to have flow.

We want the food to be healthy, sustainable and yummy.

The dishes at Foreign Cinema are inspired by fresh, local ingredients. Where does all of the food come from?

We use Capay farms in Santa Cruz, and also Glaum Ranch from that same area for our amazing eggs.

We also work with Martin Bournesque, a grower in Salinas who brings beautiful produce and works with other growers in the area to co-op the fruit and vegetables directly to Foreign Cinema three to four times a week.

Dirty Girl Farms also in Santa Cruz, brings us organic produce, and we work with Sonoma Feed in West Sonoma twice a week who bring us abundant produce; they also harvest from other small neighbor growers, as a cooperative, and bring it all to Foreign Cinema directly. We are so darn lucky to have such wonderful farmers. Without them, we would be nothing.

How does it feel to celebrate the 15th anniversary?

We want to put on a good party and raise money. It is more of a dream rather than a reality. It doesn’t seem like it has been that long, but it has.

We fight for our relevancy, we fight to be good every day and to be the best we can possibly be. We want to make sure we are evolving and keep the game moving forward.

What is one of the happiest moments of your life as a chef and why?

Cooking for President Obama for his re-election campaign in 2011 was a great honor. We were able to come together with a group of restaurants and make a big benefit meal in his honor at a fundraiser in San Francisco.

Another wonderful honor was the opportunity to recreate San Francisco’s Stars restaurant for a night, which was open from the mid 80s to the early 90s. For a night we became stars and we had Jeremiah Tower out here. We collaborated on a menu, and that was a really proud moment because it was everything I thought it could be and more.

When we bring kids to the restaurant and they spend the day here as a field trip, John and I show them how everything works. We show them the whole program of food, drinks and seasonality. We do that every year and have done it for 13 years. Whenever the kids come here to spend the day with us that is always a proud moment. It becomes this great equalizer where the kids can participate in cooking their own lunch.

You are and John are egg enthusiasts. Can you tell me what is so special about duck eggs?

They are rich and the yolk has a lot of gelatinous qualities. There is a very interesting rich roundness with a duck egg. We get fresh porcini and sautee it in the actual duck egg and the egg becomes the sauce. The porcini is the protein and you can finish it with olive oil or parsley with lemon zest. It is a lovely lunch. They have a mild sweetness to them.

And finally, what do you love most about San Francisco?

Here at Foreign Cinema we have this amazing light that changes all day long. I think it is a great city for light, shadow and dark. It is just beautiful.