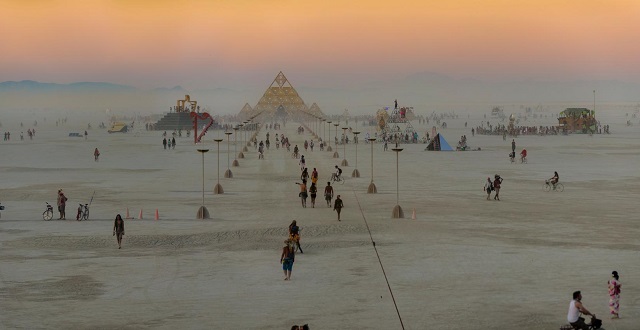 Hosted by reporter Thuy Vu, the “Burning Man Beyond the Playa” video depicts the awe-inspiring and interactive one-week art festival attended each year by more than 60,000 attendees in a harsh desert of Nevada.

People come together to view hundreds of original works thanks to the contributions by numerous volunteers and countless hours that go into its creation and preservation.

In the segment, Thuy Vu meets a female-driven team of Bay Area artists called the Flaming Lotus Girls, who go to great lengths to create an enormous metal tree stump with fire-breathing fungi. The video also examines how the Burning Man art scene has blossomed beyond the desert, with iconic sculptures transplanted into urban settings and even major civic installations like San Francisco’s The Bay Lights.

Five Restaurants with Views of the Bay Lights Art Installation

Photos: Decompression Brings a Touch of Burning Man to SF