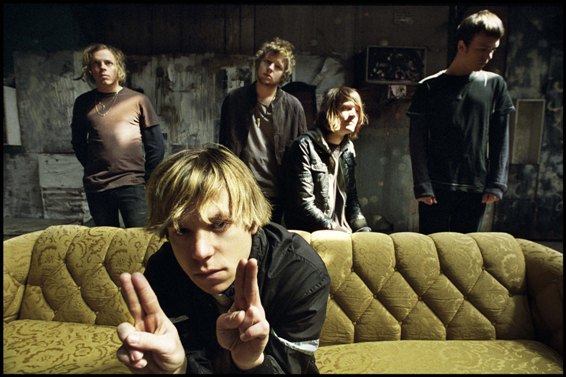 High octane American rock band Cage The Elephant released their anticipated new album, Melophobia, this month. We spoke with eccentric lead vocalist Matthew Shultz about the band’s extended time off from touring, his musical influences and the band’s live show.

Cage the Elephant is expected to go on tour again later this year with Muse.

After nearly five years of non-stop touring, Cage the Elephant took some time off—what did you do?

For the most part, we were writing. There were probably three months where we had some R&R and then we started writing the record. I spent a lot of time with friends and I have a lot of friends that are in bands as well. It was a pretty interesting winter, and a heavy one—a long winter last year. It wasn’t extremely cold, but it kind of drizzle rained all winter long. Me and a lot of my friends just hung out, wrote songs and stuff like that all winter long. And then, the band got back together. It was the first time that we had any time off from each other.

Where did you spend your time writing?

In Kentucky. We drove to a cabin in Tennessee in the beginning of October and worked on the record together as a band. It seemed like it rained every day. Definitely, one of those winters that was dominated by seasonal progression.

How did you guys decide when it was time to regroup in the studio?

What influenced the new album name, Melophobia, which means a fear of music?

For us it’s not so much about the fear or music. For us, it was more like a fear of creating music catered toward a particular image that we might want to project, as far as artistic or poetic or commercial or intellectual or any image other than just trying to communicate a honest feeling for that matter.

You recorded in Nashville, a big country town and also home to rockers like Black Keys, Jack White and Kings of Leon. Did you have any interesting encounters with other musicians while recording there?

Yeah, Alison Mosshart from the Kills came in and sang on one of the tracks on the record, which was really cool. You see people around all the time who are in bands, hanging out at the same places. And there’s a lot of great music in Nashville—a lot of underground, unsigned bands. There’s a lot of great stuff happening there now.

How would you say you’ve grown since the band’s eponymous debut record?

It’s hard to say. As a person, you can grow in so many different directions, almost like a tree with roots. I think there have been many revelations along the way that have definitely been super impactful on the creative process and hopefully for the better.

In the past, I think I’ve held best to that slogan that a lot of literature writers hold fast to, which is: “Be way more than you write.” In the same manner, same way, I would listen to as much music as I possibly could and I would try to find the culmination about all things I love about music and pour into it. Now, instead of trying to pickup style, I’m trying to move style.

You cite the Pixies as an influence – what about their vocal style do you admire?

I go through phases and when I was in my Pixies phase, it was super obsessive. Growing up in small town in Kentucky, I wasn’t exposed to a ton of music until I was well into my 20s, but I went out and got all their records. I would drive around in this crappy old [Pontiac] Sunfire that was passed down to me from my brother’s wife. I was driving it around Bowling Green and listening to their records until three o’clock in the morning. I think it was the uniqueness of what he did. Everything about it, really.

What or who influenced your erratic on-stage persona: e.g., cross-dressing and stage diving?

I think it’s just my overwhelming desire for attention. You know, it’s funny, I didn’t even know about Iggy Pop until maybe the first year. We were in a bar in Knoxville playing a show, and it was a particularly long set. During the break, the band had some drinks and it was a way crazier second set than the first set. Brad had knocked his beer on the ground and it broke. So, I picked up a piece of glass and was looking like I would cut myself. I saw all the looks of horror on people’s face so I decided to do it and I bled until I passed out…never really thinking about whether that was a good idea or not.

After the show, some guy at the bar told me that I reminded him of Iggy Pop. I remember at that time I didn’t know Iggy Pop but I knew who he was because I watched Almost Famous with that one scene, ‘Oh yeah…Iggie Pop!’ So I knew he was someone who was cool. I went home that night and watched YouTube videos of Iggy Pop and was like, ‘Oh my god, this guy was doing way cooler stuff than me 30 years ago.’