With an emphasis on Black cyclists and urban biking, Oakland collective Red, Bike & Green seeks to inspire and regenerate excitement for a generation that may have forgotten that their grandma rode bikes, too.

The modest collection Red, Bike & Green: An Art + Photography Exhibition opened at the Berkeley Public Library in January.  Comprised of just a handful of local artists, the exhibition includes some graphic design, photographs in minimalist, black frames intimately depicting subjects varying in age, sex and emotion as well as a few oil paintings.

Among the individual study desks in the Catalog Library, a smattering of deliberately arranged photographs sit on walls that face each other.  In one, a  young boy with piercing brown eyes stares out from a full-color photograph taken by San Francisco native Africano Fotographia.  Another photograph that’s simple yet striking  is an image of the first African American world track cycling champion Marshall Walter “Major” Taylor. In it, his lean body stretches over the frame of a slender bike under the text “Follow The Leader.” It takes very little effort to imagine him zipping around corners, past his competition and through the finish line. 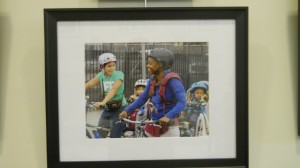 Oakland artist Ed Ntiri adds to the collection with photographs like the triumphant “State Park” or “Bus Stop” that show his effortless ability to capture a moment in a picture that begs for a story.

Other awesome works include images by photographer Juliana “Jewels” Smith with short but emphatic sayings accompany simple images. In one sweet black-and-white photo, two happy, fresh-faced girls ride their bikes under text that reads “Your Grandma Rode Bikes, Too.” The exhibition also includes oils paintings like “Celebration of the Wheel” by Gloria “Smokie” Arce and “Free” by Makeda Rashidi.

Though the exhibit is small and outside the regular environment of a museum or even a casual gallery, it’s definitely worthwhile to make a point to stop by and see this mini-collection for anyone who finds themselves in the Downtown Berkeley area with a little bit of time to spare.

Even (or maybe especially) for people who aren’t familiar with the homegrown collective and their commitment to educating the community on the health, economic and environmental benefits of biking, the images speak volumes about the potential of this organization.

The collection will be on display until March 11 in the Catalog Lobby of the Berkeley Public Library.