Haberdasher, a new stylist concierge service, was created with the primary focus of making the men of San Francisco look and feel their best.

Initially launched in Los Angeles in April, Haberdasher is the brainchild of Cal alums Ted Cordova and Ryan Schwartz. The aim of Haberdasher is simple: to help their customers look and feel great through a hands-on, personalized concierge styling service.

It starts with a free consultation; within 24 hours after supplying Haberdasher with contact info, potential customers get a call from Alanna Rayford, Haberdasher’s stylist for the San Francisco Bay Area. The actual consultation can take place by phone or in person.

Based on the consultation, Alanna may offer shopping suggestions and recommendations for the makeover game plan. The most popular service chosen by first-time Haberdasher clients is “Closet appraisal & rubbish removal” followed by “shopping without the stylist,” which translates to Alanna acting as a personal shopper, hand-picking clothing based on the look the customer is going for. She supervises the fitting to gauge comfort and the clothing suits your body.

Each experience is very personalized. Say, for example, you work in the Financial District and can only spare your lunch hour. Alanna will “map” the shops in the area to capitalize on your available time. When you meet her, don’t worry about wasting time deciding where to go; she’ll likely not only have an itinerary but hand-picked pieces in your size waiting for you in the fitting rooms. If there’s a boutique you like, she’ll check it out and find others that likely suit your tastes.

Unlike those pesky store associates who earn commissions based on what they sell (no matter how nice and perhaps suspiciously flattering the are), 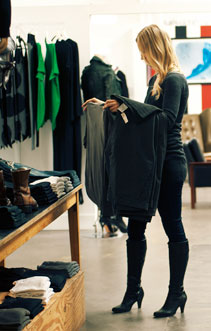 Alanna’s only goal is to find clothing that makes you feel your best. A benefit of shopping with Alanna is learning how to shop—there are options other than Gap, Banana Republic and the mall.

For founders Ted and Ryan, the development of Haberdasher happened organically. As principals of LA-based interactive marketing agency The Incite Group, they found themselves working more and more with fashion clients. This prompted Ryan to scrutinize himself in the mirror and he realized he “might not be up to speed.” He turned to Ted, who seemed perfectly put together and stylish, asking, “What’s your secret?”

Ted, it turned out, shopped with a good friend who happened to be a stylist. Voila, the idea for Haberdasher was born.

“You don’t have to be a celebrity or uber-wealthy to have a personal stylist/shopper,” Ryan says. “For some, [style is] about success in work. For some it’s success in love and dating, and for some it’s about inner confidence.”

While researching the concept, it became apparent many men encountered several key problems or obstacles regarding shopping: one, it’s too time consuming; two, it’s overwhelming; three, commission-based salespeople are too pushy to be of real assistance; and four, some men realize they’re not great at shopping on their own. They may buy a bunch of stuff and have buyers’ remorse later or buy stuff that simply doesn’t look good.

Haberdasher eliminates all of these problems with the suite of services they offer. Plus, they understand and embrace San Francisco style and culture. It helps that Alanna stylist grew up here and has spent the last 12 years working in fashion. She’s very familiar with the “I’m used to wearing flip flops and a North Face jacket” mentality that’s too common here.

“A lot of people want to step outside of the mannequin in the window,” Alanna says. “If I can help facilitate that, it’s great.”