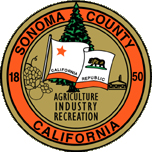 Sonoma County is a county in the U.S. state of California. As of the 2010 United States Census, its population was 483,878.  Its county seat and largest city is Santa Rosa.

Sonoma is the southwestern county and largest producer of California's Wine Country region, which also includes Napa, Mendocino, and Lake counties. It has 13 approved American Viticultural Areas and over 250 wineries. In 2002, Sonoma County ranked as the 32nd county in the United States in agricultural production.  As early as 1920, Sonoma County was ranked as the eighth most agriculturally productive US county and a leading producer of hops, grapes, prunes, apples, and dairy and poultry products, largely due to the extent of available, fertile agricultural land in addition to the abundance of high quality irrigation water. More than 7.4 million tourists visit each year, spending more than $1 billion in 2006. Sonoma County is the home of Sonoma State University and Santa Rosa Junior College.

Sonoma County is home to several Native American tribes. By the 1830s, European settlement had set a new direction that would prove to radically alter the course of land use and resource management of this region. Sonoma County has rich agricultural land, albeit largely divided between two nearly monocultural uses as of 2007: grapes and pasturage. The voters have twice approved open space initiatives that have provided funding for public acquisition of natural areas, preserving forested areas, coastal habitat, and other open space.