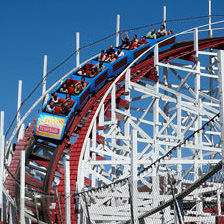 The Santa Cruz Beach Boardwalk, just east of the Santa Cruz Municipal Wharf and a short walk from downtown Santa Cruz, has enjoyed over a century of storied summers. It’s one of only two remaining seaside amusement parks on the West Coast, with an arcade, amusement park, mini-golf course and laser tag. No entrance fee means that on hot summer days, beachgoers run back and forth between the sand and the conflagration of saltwater taffymakers, ice cream purveyors and rides, enjoying the best of both worlds.

Founded in 1904 by businessman Fred Swanton as a casino, the boardwalk is listed as a historical landmark by the California Office of Historic Preservation. In 1911, famed woodcarver Charles Loof contributed the Loof Carousel, and in 1924, the Giant Dipper wooden rollercoaster took its first passengers for a ride that still thrills today. The kitsch of rides like the Cave Train reigned supreme during the 1960s, later giving way to the updated Haunted Castle, while the Cocoanut Grove Ballroom's Art Deco flourishes recall even earlier days. The boardwalk made it to the silver screen a number of times over the years, cameoing in Dangerous Minds and The Lost Boys. Read more about the history of the Boardwalk.

Today,the boardwalk plays host to big-name bands (free on Friday nights during the summer), circus acts and community events like the Wharf to Wharf Race, usually held in July. The boardwalk’s Coney Island-type charm has been souped up by more modern rides, like the Logger’s Revenge log flume, the 125-foot Double Shot tower ride and the all-new Sea Swings, each of which provides a unique way to take in the Monterey Bay scenery—even it’s just for a few fleeting seconds.

History of the Boardwalk

Half a mile from end to end, the Santa Cruz Boardwalk was the Coney Island of the West Coast when it opened in 1907. Once sporting daredevil acts, a live shooting gallery and casino, it has survived the tests of time, Disney, Six Flags and Great America. Now tied as the 44th oldest amusement park in the United States, the park remains a family-oriented, family business.

The Canfield family has owned the Boardwalk since 1915, when the Santa Cruz Seaside Company bought out the original owner. VP of General Services Ted Whiting III is a fourth-generation park employee. “My family owned the concession stand. I earned my first paycheck right over there,” he says, gesturing to a spot to the right of the kiddie ride the Red Baron. According to Whiting, the family business aspect allows the Boardwalk to survive and make plans for the future. “The park reinvests its earnings,” says Whiting. “It allows the company to hold on to the longer view.”

However, the basements beneath the Boardwalk tell a modern version of the park’s old story. Functioning as IT rooms with at least one dismantled computer, the basements are the heart of the park operations. “Our rides are high tech now. We have 10 full-time IT technicians,” says Whiting. “And in case of an emergency, all of the rides stop, except the Giant Dipper—you have to go all the way through to get out.”

The massive basement beneath the Giant Dipper reveals its own secrets. There, stacks of Southern pine lumber are painted and ready to replace whatever is needed for the wooden roller coaster. Four mechanics care for this national landmark.

Those who grew up in the Santa Cruz area fondly recall the time spent at the Boardwalk. “I would go body surfing in the San Lorenzo with friends in the summers,” says one long-time Boardwalk enthusiast. “And then we would always head over to Whiting’s for ice cream afterward.”

Boardwalk aficionados now share the Boardwalk with their families. “Just the other day I took my grand daughter on the Giant Dipper,” Whiting says with a smile. “It was just as much fun as I remember it.”
read more show less