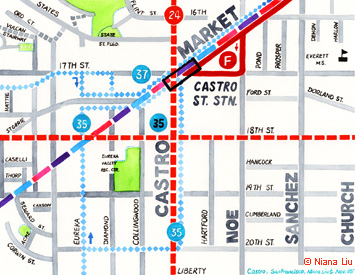 The Heart of the Castro, Castro Street is home to tons of bars & restaurants, with many more along Market and 18th Streets. Of course, the amazing, beautiful, Castro Theatre is also on Castro Street, between Market & 18th.

Located in the Eureka Valley on the eastern base of Twin Peaks, the Castro is often blessed with sunshine while the Sunset, Richmond and Haight districts are overcome with summer fog. But, more than temperate weather, the Castro district is internationally known for its large gay, predominately male, population. Castro Street, between 20th on the Northern slope of Sanchez Hill and the upper end of Market Street, is basically the center of LGBTQ life in SF.