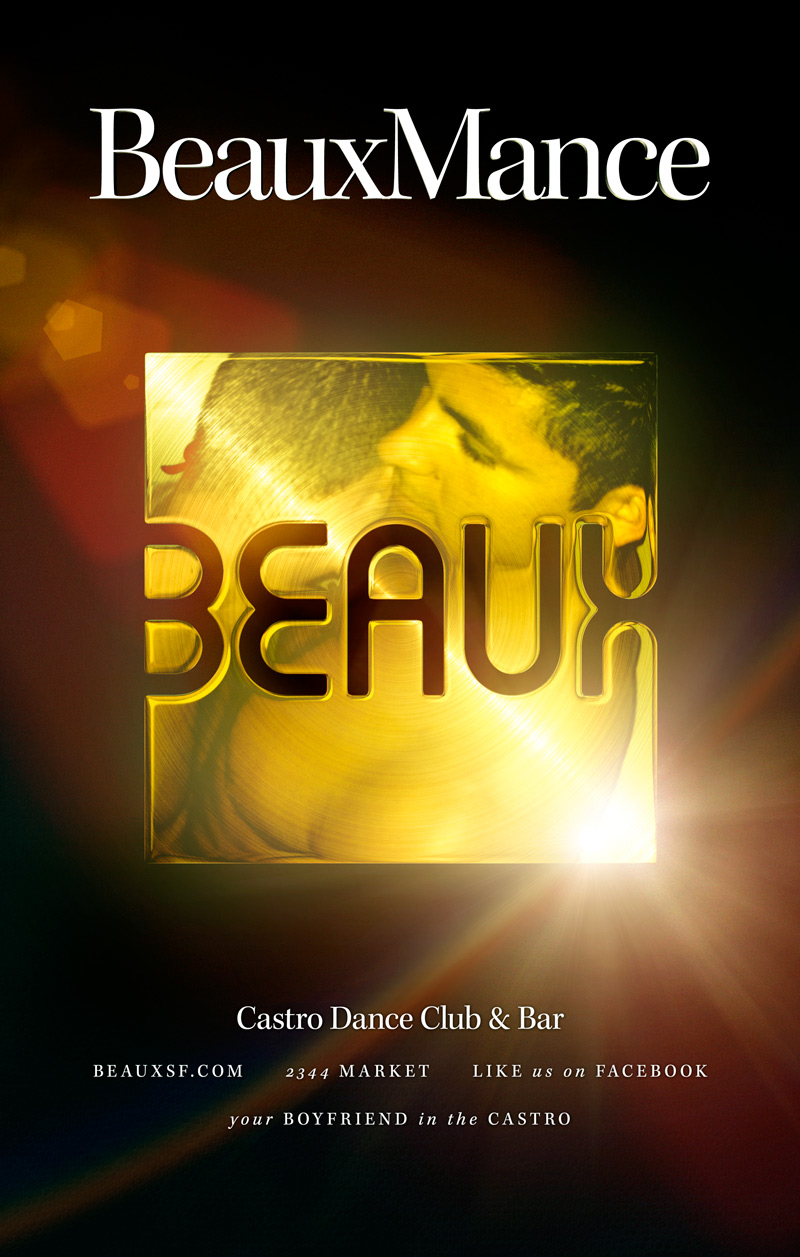 Beaux nightclub is the newest joint venture from owners Tim Eicher and partner Jeff Eubanks, as well as Rob Giljum and partner Rob Cotterman. The group is known for bringing new life into the Castro district in the past four years by obtaining and upgrading venues such as Qbar, The Edge and Midnight Sun. Beaux will be the first venue that the group has created from the ground up. In addition to the team, LGBT nightlife producer Joshua J (Booty Call, Big Top, Stallion) will be the marketing director while the fresh-faced Scotty Kennedy, most recently of Tacolicious will be taking the reins as general manager.

Beaux, the French word for boyfriends, is the inspiration behind the concept of the new nightclub.  The venue aims to create a long-term relationship with the Castro community, playfully calling itself “Your Boyfriend in the Castro”. Award winning designer Lauren Geremia, (Bloodhound, Churchill) took inspiration from the name creating a sophisticated yet approachable room that evokes feelings of romanticism with a heavy touch of timeless masculinity.  The design itself promises to be breathtaking, with all new dark hardwood floors, three separate bars handmade from oak, walnut and brass, and a mezzanine level adorned in blue velvet walls and brass sconces.

Sound and lighting play a major role in defining Beaux as the ultimate destination for night-lifers as well. Renowned sound specialists JK Sound created a soundscape for Beaux that promises to leave even the toughest of critics awed by the audio quality. The lighting design created by Blue Haze Entertainment offers a visual experience like no other, employing fixtures, features, and lasers that have never been seen by the Castro.

Beaux strives to produce a superior daytime experience as well offering a signature craft cocktail program using fresh fruit, juices, and house made potions. The specialty cocktail menu, created by the President of the U.S. Bartenders Guild David Nepove, boasts libations such as the “Beaux-Tox”, a drink made with cucumber vodka, coconut water, and muddled kiwi, as well as the “James Dean” bourbon based drink fused with unfiltered apple juice and cinnamon syrup. The drinks are sworn to be as delicious as the names are spirited. Beaux will also offer a wine and bubbles program featuring beloved labels such as Pine Ridge, Chalone, and Veuve Clicquot.

“I truly believe Beaux is the best nightlife venue created in San Francisco in the last 12 years. The design, sound, lighting, cocktails and staff come together to create an experience beyond compare”, says Joshua J, marketing director. “I’m excited to add an element of panache to the community feel of Castro nightlife”, says Scotty Kennedy, general manager.