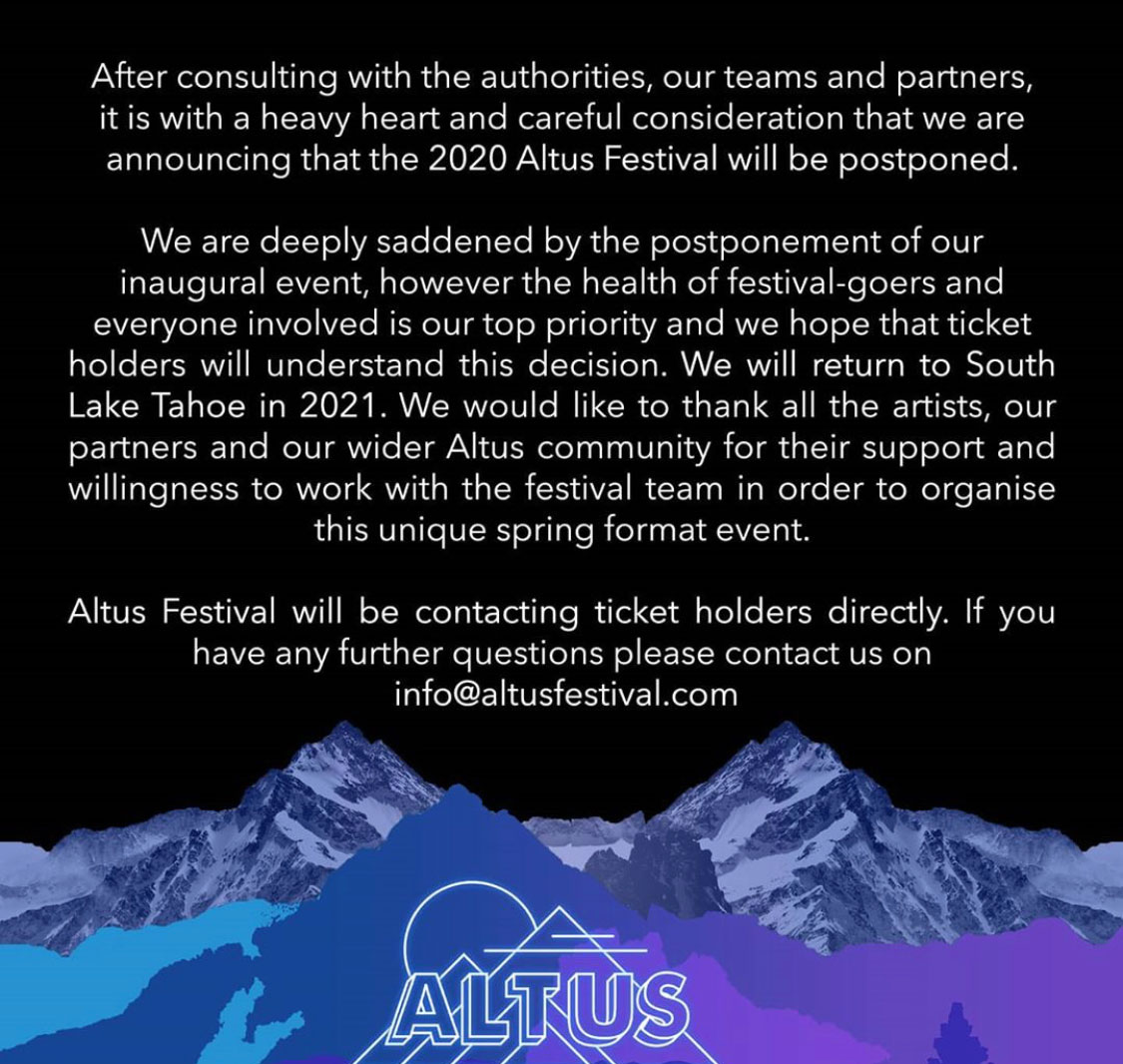 A new indoor / outdoor multi-day music festival is coming to South Lake Tahoe next month, headlined by Bonobo, Sugarhill Gang, Lee Burridge, and Justin Martin. The Altus Festival is four nights of curated house, techno, and old school hip-hop. It includes 16 different parties, showcases, and after-parties during the day on the mountain and around town and at night inside nightclubs at the nearby casinos. Other participating musicians include Ardalan, Atish, along with showcases by Pink Mammoth and Sunset Sound System.

The event is hosted in partnership with Heavenly Ski Resort and the hotels along the California-Nevada Stateline such as Harveys, Harrah’s, The Hard Rock, and Montbleu hotels.

A Standard Festival Pass is $350, but there are other packages that include lodging and ski passes. Here are the available options.

To preview the upcoming event, we spoke to one of the festival’s founders Kelechi to learn more about the origins of the event and what attendees can expect at Altus Festival.

What’s your background and how did you get into event production?

I actually started in the fashion industry producing events and then I moved onto experiential, and that ended up falling into music and tech. I started working in music festivals, working on brand festivals, so when brands and organizations wanted to curate experiences around music for people. I would work on that curation with the (Altus) founder. We’re partners in that. It carried on from there. Fred, who the founder, has been working on Altus with for a few years now. This is our first year. I came together with him on this.

How was the event conceived and what were your motivations for creating this event?

The concept was based around location. The uniqueness of merging two states together where you can be in California and Nevada with Heavenly. You can ski and have all these experiences. You go right down on the slopes and go into California or Nevada, and you go straight into the partying vibe. It’s the features of the two states. [Fred] loves snowboarding and music festivals. Tahoe and Stateline are the epiphanies of bringing those things together. That was the start of the Altus concept.

Where does the name Altus come from?

In Latin, it actually means high, get high, or get higher, obviously with the altitude. It starts this whole idea of music in an elevated space. It sounded good.

What was the approach for identifying the music talent?

I think we knew straight away that one of the important things about this festival was a well-curated lineup. The idea of finding the right balance between old school hip-hop, house, electronic, DJs, and techno. Obviously the showcases will curate parties. We’ll have our own events as well based on how we put people together. Knowing that made us think about how we would put together the lineup together. The type of people that work really well together or people you would be surprised to see them at one party. That was something we knew straight away. We had to take our time, think about, and get it right.

It’s both indoor and outdoor. We have performances on the Mountain at Heavenly Ski by Lakeview lodge with a view of the lake in the background. We’ll have the Snow Cap and the DJs will be performing during the day, and people will go down the mountain for events at Himmel Haus. We will cross the border to Nevada and do our parties in Peek, Vinyl, Blue, and our after-hours at Xhale.

What else is part of the event beyond the music and the skiing?

We will be releasing more information about pop up parties. Tahoe has a lot of hidden gems. We want to run smaller activities based on those smaller curations. It might be around wellness. It might be around activities. We love the kind of old-school vibe, which is why we’re doing hip-hop. We’ll be releasing more when we get a bit nearer to the festival.