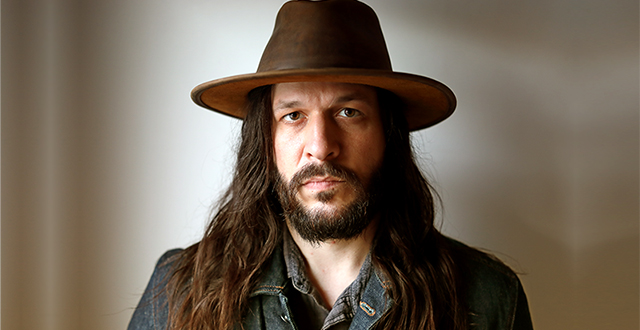 This Friday, Milk Bar presents an incredible treat; each with a uniquely different taste. There’s Oakland-based Catch Prichard, whose haunting heavy synth folk vibrates a room into a quiet trance; there’s British Columbia’s Fever Feel, who give a new life (and killer baselines) to 60’s psych rock; and the night’s headliner, Shawn James, the blues-meets-country-meets-history lessons musician with a strong vocal power most country musicians wish they could muster.

Shawn James’ previous albums (of which he has eight) have each had different vibes: blues, country, rock. But his newest, The Dark & The Light (out March 22nd on Parts and Labor Records) brings together each of these influences in a more complex and sophisticated way than he’s done on any previous album.

James took some time to chat with us about his tour-heavy life, the inspirations for a lot of his songs, and why he’s especially excited about the new album and the band’s new set-up.

SF Station (SFS): A lot of your songs have inspirations from the Bible, folklore, Greek mythology and — especially on the new album — from modern politics. Can you tell us about some of the reasons behind that?

Shawn James (SJ): Well the Greek folklore is in part because I was raised by a Greek immigrant and he taught me a lot about mythology and folklore. For example, That song “Orpheus” is inspired by that tragic tale… about how Orpheus’ wife dies. He dives down into hell to try to bring her back but she ends up dying again. I wanted to recreate that story.

SFS: What’s that mean for you?

SJ: I just love the story of unrelenting will power. There’s such beauty in not giving up, even if it kind of doesn’t make sense anymore.

SFS: Can you tell us about some of the other songs’ messages?

SJ: We’re living in pretty tough times and I’ve been writing a lot about that. “Burn the Witch” is about discrimination; “There It Is” is basically, I see shit that’s going on I don’t agree with it at all. “Love Will Find a Way” — which took me 10 years to write — is about the translation of trauma into something positive; how that trauma never goes away but how we focus that can change us; we can use that energy. I’m grateful to be able to put my energy into music; to have an outlet.

SFS: There’s a lot of intensity in your music — the presence in your music videos, the imagery on your albums, your photo shoots. But you’re such a kind, warm person!

SJ: [laughs] Well, I think as I’ve gotten older I’ve become more confident to be who I am on stage or off. I don’t feel the need to put on this serious, dark role, even when some of my songs have that energy to them. I like to tell stories, interact with people. I love being on stage and honestly, the experience of listening to the actual album–this kind of trapped thing, recorded in a studio — versus a live performances… it’s just so different. There’s a lot of power and energy and excitement in being on stage.

SFS: What’s different about your band set-up for this tour?

SJ: We’ve got a key player this time, which is something I’ve never done before and which adds more space to experiment vocally. In the past I’ve done more acoustic set-ups so this full band is pretty awesome.

SFS: You’re on tour a lot. Something like 200 shows last year? How’s that affect your life, your sanity?

SJ: I love touring! I’m a busy body and I start to get antsy being at home too much–even though I love my home, my wife, Michelle, and our dog, Peg the pug — but I love the freedom of the road. I’m all stressed arranging details beforehand: renting the trailer, packing up, securing hotels, but as soon as I’m on the road it’s like ahh. It’s a feeling of freedom, relaxation; it’s a breath of fresh air, a beautiful adventure.

Come out to Milk Bar, Friday the 22nd, and see not one, not two, but three killer bands in one night. Shawn James’ album is out March 22nd on Parts & Labor Records. Expect to see a sexy double black & white vinyl out sometime in May.