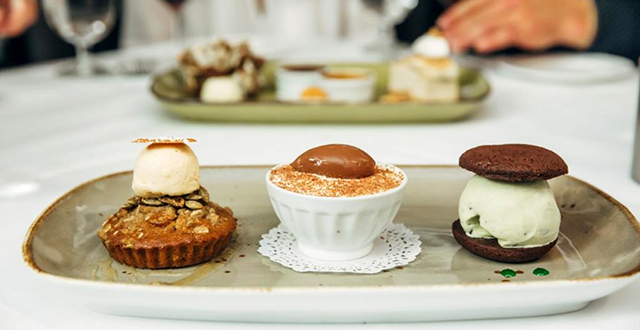 Now that we’re over the shock of 2019 beginning, it’s time to turn our attention to all-important stuff like Chinese New Year, SF Beer Week and Valentine’s Day. Ready to celebrate the fact you survived the first month of the year? There are plenty of food and drink events in February to ensure your bases are covered.

Eat Ramen at (of all places) The Saratoga

The Saratoga is somewhere you go for a good burger and a good time. Through February 13th, however, it will also become a ramen bar, serving delicious and creative takes on ramen, every Wednesday of the month. Try chef Francisco Baca’s version of ramen in this very unusual setting; and chase it down with a drink or two.

Did you know February 2nd marks a celebration of everyone’s favorite childhood food? Soma Streat Food Park is hosting a special feast of tot dishes, served by its many vendors. Cheesy, spicy, reinvented – you name it. Tickets are $5 or or $35 with all-you-can-drink beer.

On Wednesday, February 6th, from 6pm – 9pm, the Presidio’s beloved establishment will transform itself into a festive hall in celebration of Chinese New Year’s welcoming of 2019 as The Year of the Pig. Expect a Master Soup Dumpling maker, Chinese Lion Dancers, dim sum carts, themed cocktails, and other surprises. Chef/owner Ray Tang celebrates heritage and community. Tickets are $75.

'When we decided to open a yakitori restaurant, I really wanted to make our shichimi memorable, not just some dried-out, pre-ground stuff you find on the shelves of every Japanese grocery store. This Chicken Wing dish recipe doesn’t stray that far from the more common shichimi togarashi, except that we use Korean chili powder for some sweetness and add Szechuan pepper, a nod to our Hong Kong roots.' Matt Abergel of Yardbird Hong Kong. Phaidon.com/ChickenandCharcoal

On Monday, February 4th, Chef Rich Lee, previously of Hong Kong’s Yardbird, is coming to the city for a one-night event featuring chicken, miso and matcha. Hosted at Stag Dining’s Cerf Club, The Karaage Kid mixes sake, hip hop, and dishes like karaage chicken with kewpie, pasta salad with ponzu, and chicken fat rice with ginger and chili. The event starts at 7pm. Tickets are $60.

🍹🍸 The Exploratorium's most spirited fundraiser is back! From 20+ open bars to dazzling 1969-themed photo booths and lounges, we're celebrating the Exploratorium's 50th anniversary in style! #SipYourScience⠀ ⠀ 🎉 Early bird tickets now on sale via link in bio. ✨⠀

Learn and Sip Cocktails at the Exploratorium

Science of Cocktails? Sounds like an event after our own heart. On February 8th the Exploratorium’s Ninth Annual Science of Cocktails event returns; just in time for the museum’s 50th anniversary. Look forward to more than 20 open bars, where some of the Bay Area’s best bartenders and mixologists will create science-inspired cocktails; plus hors d’oeuvres, sweet treats and culinary surprises. The Exploratorium exhibits will be open, ready to be viewed by the imbibed eye. Tickets are $125.

Pier 15 on The Embarcadero, San Francisco

In need of a last minute Christmas gift? Give the gift of One Market! For every $100 gift card purchased, receive a $20 bonus gift card for yourself. Purchase online at bit.ly/OMRgiftcard. #onemarketsf

From February 1st – 28th, One Market chef and co-owner Mark Dommen and 1300 Fillmore chef/owner David Lawrence are teaming up to celebrate African American culinary heritage with a collaborative four-course menu of Californian and Southern flavors. The special menu will include dishes like Three Hour Maple Syrup Braised Beef Short Ribs and Blood Orange Cornmeal Cake for dessert. $49 for a prix fixe menu, 10% of proceeds will be donated to the Museum of the African Diaspora.

I was thrilled to find @canaan.palestine olive oil in @wholefoods yesterday so am putting it to good use by pairing it with za’atar, bread and olives, in the traditional Palestinian way. ⁣⁣ ⁣⁣ I visited this co-operative in the West Bank during my travels for #Zaitoun. Their produce is organic, fair trade and has incredible depth of flavour with peppery notes and a hint of citrus. ⁣🍋 ⁣ Their farmers tend to their crops under the most challenging of conditions and buying their products is one of the most practical and impactful ways you can support the Palestinian economy. Plus, it tastes amazing. Go buy yourself some!

Author and activist Yasmin Khan in coming to the city with her new book, Zaitoun: Recipes and Stories from the Palestinian Kitchen . On Wednesday, Feb 13, at 6:30 pm she will participate in a conversation with a local author and foodie Nick Sharma, and will sign copies of the book, which meshes delicious recipes with history and tradition.

Feed Your Soul with Local Artist Pop-up at Tilden Hotel