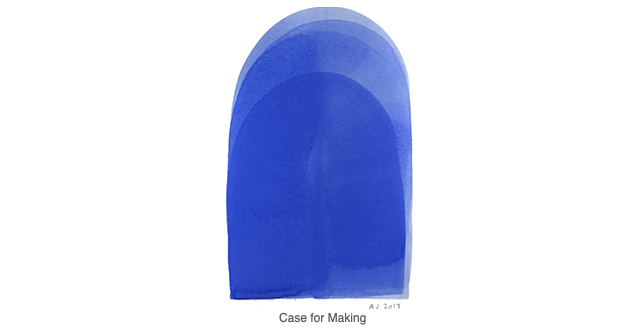 Lynn Marie Kirby’s latest multi-sensory performance and installation, somehow this relates to love, is an expansion of her previous work that recreated the tenderness evoked by two-dimensional paintings through collaborative live performances.

The show kicks off with a performance by Judit Navratil and her daughter Luna Miyu Han, at 6pm on January 24th. And on Sunday, January 27th, there will be a performance by the San Francisco Girls Chorus at 12:30pm. The exhibition will be on display through March 17th at Manresa Gallery, the gallery that’s in the alcoves of St. Ignatius Church.

Based on the performances alone, this would already be a more involved exhibition than normal. But after speaking with Kirby, the show stands out for more significant reasons; how it deals with issues like thoughtfulness, timeliness, and execution. Building upon her own work at the 2017 Biennale, where she explored tenderness with fellow artist Sarah Bird, the work carries a particularly relevant weight. 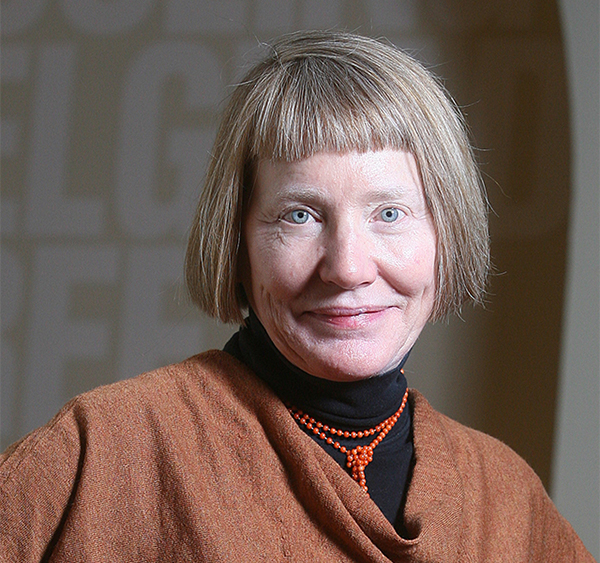 Lynn Marie Kirby at an Opening in Belgrade, Serbia in 2014, photo by Vlada Sporcic

Your performance at the 2017 Venice Biennale was so smart. The thought to “recreate the feeling of the tender gesture” of Bellini’s painting Madonna and Child through performative actions outside of the church where it was stolen, created a direct connection between yourself and the painting. Did you ever see this painting in person? Is there anything in particular about this Madonna or do you feel the gesture can be related to all depicted Madonna’s? Do you feel the Madonna evokes an essential motherly or female connection?

When my son was about ten months old, I read the Bulgarian-French philosopher Julia Kristeva’s essay on Bellini’s representations of motherhood. I was thrilled to see that the independence between a mother and child depicted in his paintings — as written about by Kristeva — compared with the conventional engulfing relationship of more conventional work — could be a way to live my life with my son.

The gesture of tenderness enacted in the square outside the church where the painting was stolen, was a meeting of two people through the simple act of touch. I wrapped my arm around participants; we faced out into the square together, and sat, being present to one another, our touch created a simple human connection.

This first phase of the project, made in collaboration with Sarah Bird, explores kinds of togetherness and connection that can happen between people — that is especially needed at this political juncture — was for me represented in the gesture in the missing painting. I was especially struck, for example, by an increasing lack of compassion for the plight of refugees victimized by strict immigration policies in Europe and in the United States following the U.S. presidential election of 2016.

Moving from painting to performance requires perception from our senses outside of vision. Visitors will experience this exhibition through each of their five senses including specific scents and drinks that were made for this show. What is your interest in employing these sensory centers? What do you think these additions will do to the perception of your show?

How do we remember? We have become conditioned to remember with photographs — a moment locked in time. We wanted to create another form of memory, one not tied to the image, but to a deeper sensory memory that goes to the primal part of the brain. I am committed to making ephemeral work and time-based experiences. It became important to frame the first part of the project with touch and scent [as] scent is a time-based experience. Smell takes us to a deep place in our brains and creates a different experience than the rest of the senses. I can come upon a scent and suddenly move across time in a flash.

When I sat in the square in Venice, holding strangers, I was bathed in the scent Loreto Remsing and I made together — made with the history of the our site in Venice in mind: the scent of the missing wood of the painting, the frankincense from the church, and the flowers and herbs from where refugees were coming from around the Mediterranean. When contact and connection ended, when it mutually felt we had been together enough, I gave each participant a small vial of the scent to take away — to remember, and to re-enact the tender gesture.

Now at Manresa Gallery, which is situated in four alcoves inside St. Ignatius Church, in the expansion of the project, I work with all five senses. What happens when we touch or taste or listen? The film theorist Laura Marks talks about how to “restore a flow between the haptic (touch) and the optical that our culture is currently lacking”. The embodied physical and social spaces of viewing films or art works frame our sensory experiences but do not often offer a broad spectrum of sense experience, we work mostly with sight and sound. The use of the senses has a long history within the Catholic liturgical tradition. In the second phase of the project, somehow this relates to love, different sensory experiences are activated, and perhaps different states and memories arise.

I noticed in your artist statement that your projects often start with a personal resonance. This exhibition seems to center around the difficult politics of the border, gender, and family – all highly charged topics. Where did your interest start in this area? Do you have any personal connection to it?

My work is also rooted in a conceptual performative and sculptural practice; I have a materialist structuralist cinema background. I am committed to the experience of an art event as one that is ephemeral and unfolds over time, in both the making and viewing.

Something sparks the initial interest in a site, often this link is personal, I live or work nearby, or have a personal history with the site — it is my gym as in one project. Having a history with a site adds depth. I was raised Catholic, I grew up outside of the US, and was often the foreigner.

My current work continues to be made through encounters with people and sites. As an artist and teacher, I enjoy interacting and working with people. I no longer think of myself as the sole maker of my work, but rather as the co-curator/ collaborator/ frame builder of multiple encounters and materials.

As we examine the treatment of women and children in immigration and detention sites in an atmosphere of rising consciousness about the lack of power that women have had in this culture, a loss of tenderness could be said to define our contemporary moment. The Catholic tradition venerates the Madonna but historically has given little space to actual women and girls. My project creates such a space.

How did you become involved with La Casa de las Madres and Grannies Respond/Abuleas Responden? How has your time with these organizations influenced your work?

I have long admired the work of Las Casa de las Madres, and through the generosity and facilitation of the organization’s administrators was able to work with extraordinary women whose work is displayed in one of the alcoves in the show. For protection the women must remain anonymous, but their work is a testament to their ongoing artistic practices.

We met and talked and worked together to produce what they wanted to make for the show. I was struck by the generosity of all the women I worked with, through their work they thought about others.

The phrase “what are you doing here,” which one of the women was asked on the bus by an aggressive stranger, is displayed in the gallery in languages of contemporary immigrants, including Arabic, Tagalog, Hindi, Turkish, Spanish, Portuguese, Chinese, and Vietnamese.
A Shakespeare quote: and thought she be but little, she is fierce inspired two women, one of whom is hard of hearing, to work together to produce a video using ASL (American Sign Language). One woman leaves only her hand prints as the most basic form of drawing, a way to remember and an act of touch.

I admired how Grannies Respond/ Abuelas Responden had traveled to the border to protest the government’s family separation policy. These are women in the later years of their lives who felt compelled to act — they got on a bus and went to McAllen, Texas to protest. All along their journey from upstate New York, where they began the trip, to Texas, they were fed and housed by strangers and supporters. This gave me great faith in our nation.

I wanted to include their work in the show, as I wanted to include the work of women of all ages and what we are thinking about, making, and doing. I was introduced to Michelle Clifton who is one of the Grannies, who acted as the facilitator. In consultation with the group, we decided to display the posters and banner from the protest at the border as part of the show. Each of the signs is made by one of the protesters or a family member, they are touching and beautiful, and say things like, “put yourself in their shoes”, “Jesus was a refugee”, “love thy neighbor”, or have a drawing of a child and a cage.

I am also thrilled to be working with members of San Francisco Girls Chorus Level IV Ensemble to illuminate the relationship between mothers and daughters. The chorus is under the directorship of Valérie Sainte-Agathe, performances are being conducted by Anne Hege, Level IV Director. Drawing from language generously provided to us by the girls themselves about their relationships with their mothers, I collaborated with poet Denise Newman on the libretto, and composer Jennifer Wilsey set the words to music. The chorus will perform at the opening nights. During the run of the exhibition, a portion of the performance will play in one of the alcoves.

For better or worse, your work continues to be exceptionally pertinent, especially with our current timing of the government shutdown over a ridiculous wall. Do you plan on continuing to investigate issues of the border and family separation? Do you have any plans of what work discussing these topics will look like?

The geographer Yi Fu Tuan talks about the vertical space of the cosmos, how we used to look to the heavens to think outside of ourselves, the self not at the center of the universe. In today’s more linear view of life, we have lost much of our connection to the sacred, yet specific sites still connect us to the transcendent. The square outside of the church in Venice where I sat in the company of others, in attempts to find the missing tender gesture, had this connection. The sound of the church bells from the tower above gave form to the silence of sitting, and the brick beneath our feet anchored us to the earth.

St. Ignatius Church and the gallery alcoves inside the church, also connect us to this space of thinking outside of ourselves. somehow this relates to love is the second part of this exploration around missing tenderness that began in Venice… Sarah Bird and I are planning on returning to Venice next fall to explore a third chapter around missing tenderness.