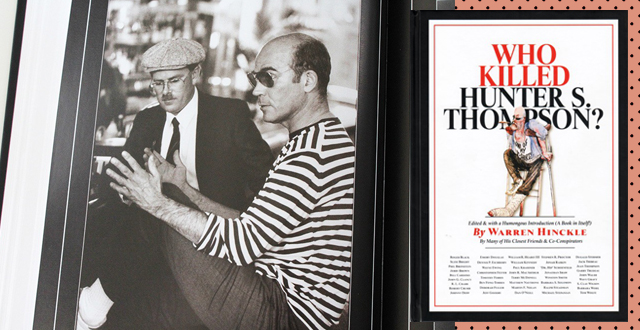 Ron Turner, founder of Last Gasp Publishing, provocateur, and self-proclaimed “old hippy” is a hard man to pin down. I can always get a hold of him, but having a conversation or interview in a quiet location is simply out of the question–it’s got to be in one of San Francisco’s landmarks and he’s going to know at least half the people there. When I asked him last week to have a drink and discuss his latest publishing project, Who Killed Hunter S. Thompson?, his response was, “Tuesday, 6 to 8 at the Stud. Best of the Bay party. I have to pick up best Bay Area publisher award. Want to go?” Perfect.

I walk into the Stud and Ron’s already waiting for me at the bar, with 8 pounds of books ready for myself and Tim Redmound of the SF Bay Guardian. As I grabbed my plastic-wrapped copy, my eyes lit up and I held it to my chest, only for Ron to explain, “Anything good in this town comes in a condom.” From the perspective of my SOMA barstool, I could not have agreed more.

The cover has big, bold, Times-New-Roman-esque letters which are partially hidden by a Ralph Steadman drawing of Hunter S. Thompson slumped in a stool, propped up by a crutch, with his signature TarGard cigarette filter clenched between his teeth. Ron tells me this was drawn during Thompson’s recovery from a broken foot, which he injured in a dive off the railing at the Mitchell Brothers O’Farrell Theatre during one of his many shifts as the “night manager.”

Who Killed Hunter S. Thompson is actually six books hidden into one–a fitting attempt to illuminate the life of a man whose words danced across the page but whose enigma can hardly be contained in just one volume. Last Gasp was wise to devote over 500 pages instead. Beginning with a book-length essay by the legendary journalist, editor, and San Francisco icon Warren Hinckle (the man we can hold responsible for assigning Thompson and Steadman’s coverage of the Kentucky Derby, igniting the start of Gonzo journalism). Readers are quickly enveloped in Thompson’s world, especially in his favorite city: ours.

This book is San Francisco through-and-through, a history told by the people who lived it, each shown the way by a maniacal character who could have existed in no other time or place. I’m only 50 pages in, but I already feel like I’ve taken a tour of San Francisco’s history, from Specs to Tosca and back again, all with Thompson as the beating heart of the story.

Come grab a copy, meet the contributors and have a drink at a current SF landmark, 111 Minna, this Monday, December 11th 6-9 PM at the release party for the book. I’m told Johnny Depp can’t make it due to his filming schedule, but who knows who else will show up! Good conversation, depravity, and legendary history are sure to ensue. See you there.

Books will be available for purchase at the event or you can order the book here.