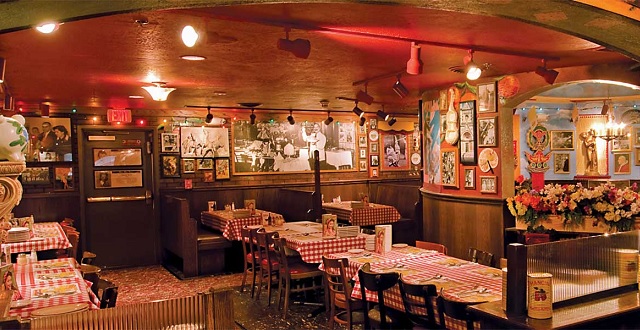 Two weeks ago, an unexpected sign appeared taped to the glass window of the building at 855 Howard Street announcing that the family-style Italian restaurant chain Buca Di Beppo officially closed.

The SoMa district location, like all locations, served portions of pasta, bruschetta, and other traditional dishes large enough to feed a small army or a large family. The SF establishment had a 20-year run and was known for its glitzy interior decor-which is said to be “intentionally hideous.”

The restaurant is part of a chain brand owned by parent corporation Planet Hollywood. Buca Di Beppo currently still has four open restaurant locations in Northern California: Palo Alto, Campbell, San Jose, and Sacramento. In total, there are 92 Buca Di Beppo locations worldwide, with 87 being company-owned and 5 franchises in the United Kingdom.

It is unclear what exactly led to the restaurants closing, but a recent permit filed with the city of San Francisco suggests the 12,000-square-foot building that housed the restaurant will be transformed into a new office space. The building is currently zoned for development up to 130 feet in height, but that could change depending on the upcoming remodel.

The Orlando, Florida-based restaurant chain made similar moves for two more locations in Georgia and in Santa Monica, California. This indicates that the changes are part of a larger strategy and not just linked to rising rent prices in SF. Regardless, it’s unfortunate the restaurant will not be replaced by another dining option.