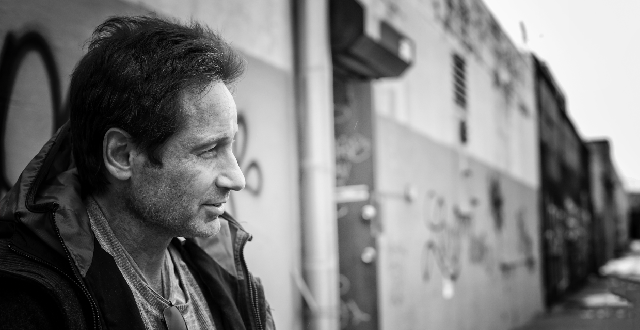 Most people know David Duchovny as Agent Mulder from the esteemed sci-fi show X-Files, or as Hank Moody, the troubled womanizing novelist in Californication. After a successful career in acting, Duchovny has stepped up to the mic, releasing his debut record, Hell or Highwater, in 2015. Last Wednesday night at the Social Hall, we had a glimpse at Duchovny, in his latest role of the musician.

Usually actor-turned-musician experiments don’t seem to translate. Billy Bob Thornton never saw much success with his band, the Boxmasters and Keanu Reeves, who thankfully never quit his day job for Dogstar. Then there’s Jared Leto, who has had perhaps one of the more successful transitions with Thirty Seconds to Mars, emulating his oft-eccentric characters to his music. Juliette Lewis played the Independent a few months back and sold it out (which is commendable) and now, Duchovny is on the road with his band to play his nearly forgotten album, mixed in with a batch of new tunes.

Duchovny is a bit different, in that he didn’t use his name to further his musical career. He never claimed music as his first passion, or forgotten love, it was just a hobby he picked up after X-Files had ended, and looked to influences like The Beatles and Wilco to help shape his tunes. All in all, Hell or Highwater was a valiant effort for someone who really had no musical background. However, one can make a good record with the help of a producer and a killer band, but how it translates to the stage is equally important and equally difficult. For some acts, performing is much like acting (i.e. Gwar, Kiss) but for most, playing music is a pure form of expression that is fueled by a candid passion that cannot be taught.

The Social Hall was half full, and felt more like a high school dance in an auditorium somewhere in Hollywood than a venue tucked behind the Regency Ballroom in San Francisco. Duchovny’s persona was straight-forward, no guitar. It was an unusual sight to see someone so revered in the acting world put themselves in such a vulnerable position, opening himself up as a newcomer to this sort of stage. After every song, a flurry of women screamed and gawked at Duchovny’s presence.

Music isn’t something you can just pick up and be good at right away. The overall sound lacked clarity; his vocals were muffled and loaded with reverb. A unique vocal presence was hard to identify, at times his sound resembled the hoarseness of Mark Oliver Everett from the Eels. His band was solid, but also lacked emotion and seemed hesitant to really let loose. A woman in the beer line bluntly professed, “I don’t even know why I’m here. I just thought David was hot,” which might not have been too far off the mark from why many curious, long-time Duchovny fans had come out for the evening.

In any case, fans were familiarized with the Hell or Highwater record that included hit songs “Stars” and “3000,” and also some new material was introduced. Duchovny was engaging with the audience, explaining the inspiration for the new song “Angel,” exposing a sensitive artsy side.

I was in Paris at a church and people were praying for others,” said David, “and it struck me as a beautiful way to live.

Duchovny has potential, probably more so than some of the other actor-turned-musicians out there. His flashy, enigmatic smile still shined bright, and he was clearly having a good time, but there’s a way to go before he works his way up to the Regency Ballroom as a formidable performer, which certainly isn’t out of reach.

For old school David Duchovny fans, we’ll end it with this photo-montage video and Bree Sharp’s “David Duchovny” song from 1999, because really, how can anything current (i.e the new-ish X-files episodes) hold a match to our nostalgic love of back-in-the-day Mulder?