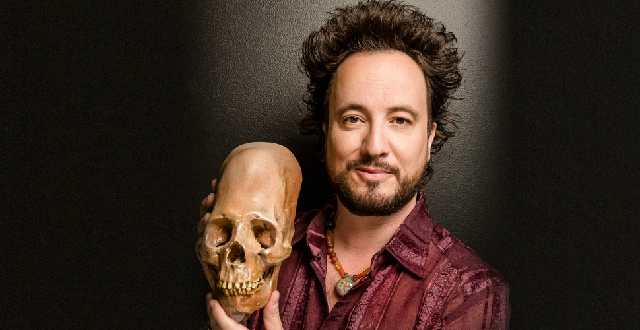 Being the very first convention of its kind, devoted to fans of HISTORY’s Ancient Aliens, sci-fi buffs, and pop culture enthusiasts, Alien Con’s success relied upon the real question of are the fans out there? And the answer was, yes–lots of them. With tickets sold out on Saturday and fans clamoring to get into panels, it’s safe to say this weekend’s Alien Con touched down on unfamiliar territory and came out on top.

While there was some internet ranting about there not being enough tickets or seating in the panels, some kinks were to be expected with a new convention of this size. The bright side? The turnout was far above what was anticipated and should hopefully mean the return of the event next year– with even more independent artists, celebrities, and other guests speakers on board. And while there is no news (yet!) of what’s to come in future years (please, don’t move to Vegas!) the three-day affair had fans out in droves (and costumes!).

The more you knew about the world of sci-fi, the more fun you were going to have at this convention. A lot of the celebrities and spokespeople from this underground community would probably be met with blank stares from the general population but here, they were earth-dwelling gods.

The biggest highlight was meeting Giorgio Tsoukalos, the star and consulting producer of Ancient Aliens. He has appeared on The Travel Channel, The History Channel, the Sci-Fi Channel, the National Geographic Channel, as well as Coast to Coast AM. He’s also the co-founder of Legendary Times, a magazine centered around ancient astronaut theory. And, for someone who can speak so fluently about all things outer space, he was extremely down-to-earth.

Photo IG @nekolopolis with the cast of ‘Land of the Lost’

After going overtime with eager fans on Friday, a closed-room taping for the Latin American version of the History channel, then being whisked away for two live Facebook video recordings for a nerd website, Tsoukalos was still full of energy and ready to chat with us.

We learned that Tsoukalos has a soft spot for San Francisco–he lived in SF and in Sausalito from 2000 to 2005. He also gave us a couple bucket list travel destinations for those looking to use their vacation days toward following the path of our ancient ancestors…and aliens. The list skipped past Egypt (because, duh, that’s Aliens 101) and at the top of the list was Pumapunku, part of the larger complex of Tiahuanaco in the highlands of Bolivia. “[This place] is so unique in the way it was constructed, shaped and positioned–it is perhaps the most intriguing ancient site on the planet.” Second on Tsoukalos’ list was Delphi, Greece “it’s a stunning place, not only for its landscape but for the engineering knowledge of our ancestors there.”

Thirdly, Tsoukalos mentioned the islands of Japan as a place for ancient alien believers to pay attention to. “Their entire history, and not just mythology, but the Emperor family there today, and largely the country of Japan, agrees that the Emperor family is direct descendants of people from the sky, the Dragon Kings…If I find stories of a family that’s part of lineage that descended from the sky, my ears perk up.”

He suggested going to some of the museums in Japan, notably the National Museum of Tokyo has a collection of the Dogu figures.”For all intents and purposes, these figurines look like modern day space suits. One has to wonder if it was all a figment of our ancestors’ imaginations or did they see something and then try to carve it in clay or stone–because it was something so extraordinary that they needed to record it–otherwise, no one would believe it in the future.”

Food for thought. “And yes why, not…”

In other interviews, you’ll hear Tsoukalos crediting his grandmother for spurring his interest in the extraterrestrial. When asked further about his family’s support of his studies he added, “my family is fully on board with his research and studies of the alien influence on humans. These were topics that were dinner table conversations at my house growing up…nothing’s changed. Not a week goes by without my dad sending me a photo of a newspaper article saying ‘this may help your research.’ It’s a great support system.”

Tsoukalos was also extremely appreciative of the fans who’ve kept Ancient Aliens on the air, well into an impressive 11th season. He was unphased by the number of photo requests on the horizon, fans wearing t-shirts of his face, and the requests to say “it had to be aliens!” When I asked him how he felt about all the fan hubbub he simply said, “I love the support, it’s tremendous.”