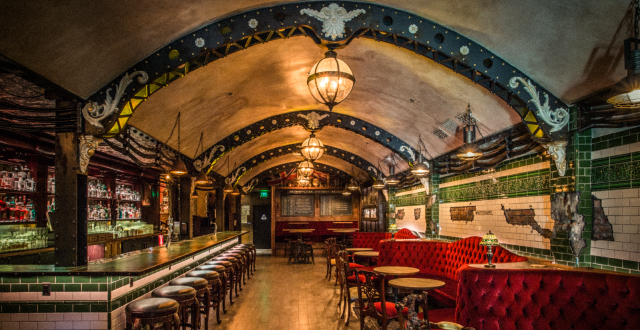 In the heart of the Tenderloin, Whitechapel, the sophisticated, dark underground gin bar, quickly became a popular hot spot for a night out. Since the opening last fall, Whitechapel has been a successful collaboration of San Francisco visionaries: the owners are Martin Cate (Smuggler’s Cove) and John Park (Novela), the beverage director is Alex Smith (Novela, Gitane) and chef David Murphy (Austin’s Uchi) is responsible for the menu.

We caught up with owner Martin Cate, who’s been on the local bar scene for almost a decade, about pub food, ‘getting’ cocktails and the latest alcohol developments in the city.

What’s behind the British influences and the Victorian direction ?
When we created Whitechapel, we wanted to tell the story of gin in a colorful and exciting way. Most of the story of gin takes place in the United Kingdom, and we wanted to celebrate that in the design. The food menu celebrates British and Dutch influences because of their gin heritage, and Bangladeshi because, since WWII, the majority of residents of Whitechapel, in the East End, where there was a lot of gin production historically, there has been a culture of Bangladeshi descent.

What inspired the cocktail menu, especially the ‘Honor Among Thieves’ section?
Alex was inspired by a few things—the menu tells the complete story of gin with classic drinks through modern creations, in over 105 cocktails. Honor Among Thieves is there to showcase some of the great contemporary gin cocktails of our industry peers, and people that Alex respects as well.

Smuggler’s Cove is all about rum. Why the decision to focus on gin this time?
It was Alex’s idea to do a gin bar, and my idea to make it as in-depth and over the top in its total dedication to a single spirit as Smuggler’s Cove. Rum has the good fortune to already telegraph a sense of leisure and relaxation. I believe that gin is vibrant and playful, and we needed a space that illustrated that. We don’t think of gin as old fashioned or stuffy, and we wanted to share our passion for it in a fun way.

What’s your advice to someone who is completely new to gin and cocktails? How to go about it and about the menu?
We have a short cocktail menu of some favorites that are a great starting point, our staff is happy to offer suggestions. I think Alex’s original gin cocktails are a great place to start, so you can see right away how well gin integrates into other ingredients.

What are some of your favorite spots to eat and drink in the city and particularly in the Polk Street area?
I wish I could get out more than I do, but I do love that we’re next to Brenda’s Soul Food, which is excellent. I also love being close to Cadence and Mr. Tipples, which is an amazing spot that offers two equally wonderful experiences under one roof.

You opened the Cove in 2009, Whitechapel in 2015—what has changed in that period?
I’ve seen a lot of new places that quickly became lasting favorites arrive on the scene, like Comstock Saloon. San Francisco continues to defy easy pigeonholing as new concepts draw from wide inspirations. I think there’s been a great emphasis on developing great small plate bar food that really goes with cocktails, at places like 15 Romolo, ABV, and Trick Dog.