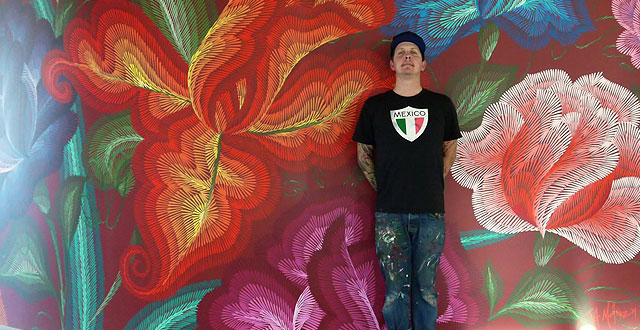 The vibrant multicolored works of Oakland-based muralist Jet Martinez can be found in the streets of San Francisco and adorning urban edifices around the world. Having spent part of his childhood in Morelos, Mexico, his works take inspiration from Mexico’s rich visual culture and folk art, exploring not only its beautiful traditions, but also ideas of community building through art and creativity. We spoke with Jet about his evolution as an artist and the challenges and rewards of creating large-scale works.

When did you first realize you wanted to be an artist?

As far back as I can remember, I have always loved drawing and panting. I really realized that it was something I wanted and could do as a career while I was studying Spanish Literature at UC Boulder.  I guess it was always something I did, and it took seeing someone else (a professor) do it, to see that it was actually something that a person could do for a living. That was in 1995.

How did you begin creating large-scale works?

More than anything, my passion for painting was a desire to paint large-scale works.  I painted my first mural in a daycare center in Denver, Colorado.  I painted a couple small pieces when I moved to the city in ’97.  While studying at the San Francisco Art Institute, I took a mural class with Rigo 23.  That really gave me a stronger idea of what was involved in professional murals.  Then, I started locally, hitting up my neighborhood stores and asking if I could paint their walls.  Luckily, I had good relations with my neighbors and they gave me a chance.  The first mural led to the next, and so on and so forth.

What are the challenges and benefits of mural painting over smaller canvas pieces?

Some of the initial challenges were finding spots to paint murals. Thinking of ideas has never been a challenge, but getting people to believe in my abilities was hard at first. It was definitely a challenge learning the business aspect of muralism. The pace of my carrier has been pretty natural and organic, so it’s felt like my ability to make a living has been proportional to my ability as an artist.

Tagging has been a recent challenge. I don’t come from a graffiti background, nor do I play by those rules. I come from a lineage of muralists inspired by the Mexican greats who came much earlier than the graffiti culture. However, we share the same space, and the ability to destroy is much easier than the ability to create something lasting. In the end, however, the positive far exceeds the negative.

Although I love studio work, I am definitely more interested in murals. For one, murals are a great way for me to engage communities and not feel so isolated in my studio. I have been able to travel and meet interesting people from all over through my work.  For me, murals have been a great way to own my art.  Creating a large body of work that many people have seen and enjoyed has given me a better footing when working within the gallery system. Murals are my primary income, so I don’t have a great deal of pressure to make a living through galleries, where there are generally pretty sizable commissions to pay, and no guaranteed sales. My murals have allowed me to feel like I can make gallery work that I enjoy making, rather than making gallery work that I think will sell. This has helped me develop a body of work that I can feel proud of and that I think is unique. And although it’s been the longer path, I feel like all the public work behind me is starting to take root in the gallery world.

I find balance in my life through my mural work. But mostly, I love the fact that my kids can walk around several towns and go see some of my pieces. I hope that someday my work will serve as a role model for my kids to engage positively in whichever community they are in.

Your work draws from traditional patterns in Mexican folk art. How did your childhood in Mexico influence your style?

To be accurate, not all my work draws from traditional Mexican folk art.  It has been of great interest to me for the last several years, but I have done different work before, and I expect to make different work in the future.

My early childhood was filled with a lot of moving around and change of environments.  A good part of my early childhood was spent in Cuernavaca, Morelos, Mexico. It is an incredibly culturally rich part of Mexico, and as I have always been a very visual person, I have always carried memories of the visual culture of that place.  Like a lot of immigrants in this country, it was hard for me to adjust to this country as it’s culture is more disparate and subtle.  Holidays are more often reasons to shop rather than reasons to reflect on life. I’m now really accustomed to this culture and see the intricacies and beauty of it, but I still have a deep nostalgia for Mexico.

My recent work inspired by folk arts is not really about just the beautiful aspects of folk arts.  I am currently working on this series as my way to talk about positive aspects of Mexican culture.  I wanted to create work that references Mexican culture without talking about immigration, drug wars, crime, corruption, and perpetual strife. I wanted to reference visual aspects of Mexico that do not include mariachis, Aztecs, Cesar Chavez and all the other typical references. Keeping the societal problems of Mexico and the US /Mexico relations in the forefront is very important, but I think it’s also important to keep sight of the positive aspects of Mexican culture. There are plenty of people doing powerful work about the struggle, and I celebrate them. I just think that there is also room for someone like me to also do work that reminds us what exactly we are struggling for. My way to keep the struggle alive is to work towards beauty and grace.

You’ve painted murals in public streets around the world. What have those experiences been like?

The experiences have all been pretty different.  Even painting from one part of the Bay Area to another can be drastically different. One thing that is pretty common is that when I do work that comes from a place of sincerity, it’s generally well received. Some of my best experiences have been in some pretty poor and sketchy areas. In more affluent areas, most people take nice things for granted, while communities that don’t have much really appreciate the fact that someone takes the time to do good work in their community.

If you could paint a mural anywhere in the world, where would it be?

I will always love doing work in Oakland, SF, and the Bay Area. This is my place. Mexico and Brazil also have very special places in my heart. Japan, Australia, Spain, and my current obsession, Norway.  Really, I’d like to go everywhere possible.