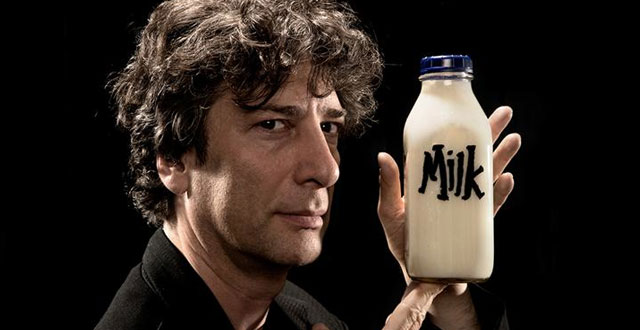 Last Tuesday, a very tightly packed Castro Theatre hosted speaker Neil Gaiman, author of over a hundred short stories and graphic novels, as part of The Long Now Foundation’s series Seminars About Long-term Thinking. In his talk, entitled “How Stories Last”, Gaiman explored the importance of storytelling as a means of survival in our culture.

While Gaiman is probably best known for The Sandman, a DC Comics series about the ruler of dreams, some might more easily recognize him as the author of Coraline; adapted in 2009 into an animated movie about an 11-year-old girl who finds herself trapped in an evil “copy” version of her own world.

Instead of harkening back to characters from his own works to help illustrate our addiction to stories, Gaiman drew from conversations with satire novelist Douglas Adams, lessons from his Holocaust surviving grandmother, and the mystique of the glass slipper from Cinderella.

The glass slipper in Cinderella was most likely a fur boot

“’Once upon a time’ is code for ‘I am about to lie to you,’” Gaiman half-jokes. “The act of reading a story or listening to a story is the act of knowing you’re being lied to.” Many tales we remember may have actually had details changed to make them more interesting and worth remembering. The glass slipper in Cinderella was most likely a fur boot, he says, but a sparkly pair of heels sounded better and allowed the story to be retold time and time again.

And stories aren’t just fun to tell at parties—they hold much more power and meaning than we give them credit for. Many stories we now tell predate us by thousands of years and were made shareable only through the importance we assigned them. In many ways, Gaiman says, stories can be likened to viruses that simply use people as vehicles to spread.

“Information in a story is something you can access as real info,” Gaiman also says. “You can access it as if you have experienced it—you can use it—and then you can pass it on.” What we read and remember becomes important to our society because we derive lessons from stories over time that can be transferrable to us in our everyday lives.

Even more vital is the potential for escape that stories provide us with. Gaiman recounts how his grandmother was lucky enough to come across a copy of “Gone With The Wind”, by Margaret Mitchell, during her Holocaust imprisonment. Having been forbidden books, she spent many of her days recounting what she had read in secret the night before. This ritual helped bring temporary comfort and distraction to her peers, many of whom did not survive to retell them.

While it seems the written tradition of storytelling is slowly being overpowered by an oral one where the impermanence of the Internet is king, Gaiman promises the stories we continue to collect for future generations will not easily be lost.

“Douglas Adams once told me that books are sharks,” he recalls. “There were sharks back when there were dinosaurs…the reason there are still sharks is that nothing has turned up that is better at being a shark than a shark is.”

Listen to Brainpickings audio recording at the Long Now Foundation on June 9th, 2015: