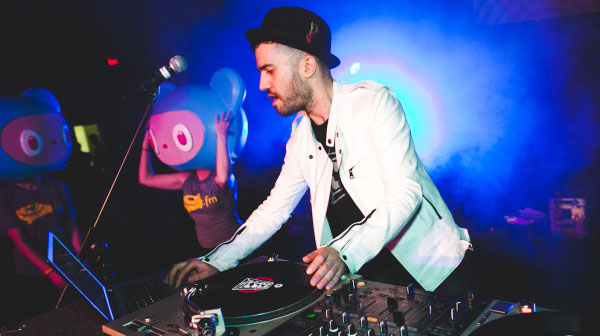 The Warriors won it all. We are the champions. Time to go out and celebrate on the dancefloor at San Francisco’s best parties.

Thursday June 18: The M Machine at Ruby Skye
These SF natives’ EPs have landed them releases on Skrillex’s label OWSLA and tours with the likes of Porter Robinson and The Glitch Mob. They’ll spin their dark, aggressive mixes of electro and dubstep for the local fans at Ruby Skye.

Thursday June 18: Shiba San at Audio
A Dirtybird favorite right now, this French master of bass-filled tech and deep house is on a roll. His Planet Floor EP has been tearing up summer festivals with its minimal yet satisfying sound.

https://soundcloud.com/a-trak/out-the-speakers-feat-rich-kidz
Friday June 19: A-Trak + Araab Muzik at 1015
Araab Muzik will get the crowd pumped with his live trigger pads before A-Trak brings out the heavy bass with dirty, hip-hop beats. The Jewish-Canadian veteran of turntablism is a leading voice in dance music as well as one of its most respected tastemakers.

Saturday June 20: Amtrac at Mezzanine
Kentucky-based producer Amtrac is one of the most gifted producers to come out of the Deep South in the last few years. His deep, driving basslines complement the funky vocals he samples for groovy tracks that consume the dancefloor. He’s less about the drop and more about the journey.

Canadian duo Purity Ring play two shows back to back this weekend at The Fox, the first of which quickly sold out. This second show, added by popular demand, will feature the act’s crisp trap beats supporting dreamy synths and Megan James’ haunting vocals.

Saturday June 20: Dimitri from Paris at Mighty
Parisian of Greek decent Dimitri from Paris has a sound that is rooted in the disco that influenced early house music. He’s not afraid to touch records spanning from the 70s all the way to today. Featuring warm retro sounds, soulful vocal samples, and early drum machine bass, his sets represent quintessential disco from the old to the “nu.”

AUG 28 GET IT?! GAMESHOW at Cobb's Comedy Club
The Best Events
Every Week in Your Inbox