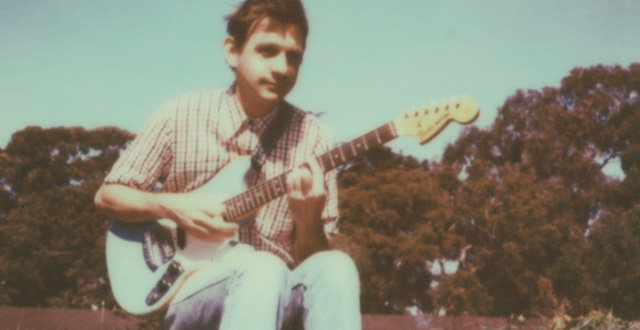 San Francisco band Sonny and the Sunsets has adopted a reputation for a laidback style and quirky songs that disintegrate the fine lines of art, mixing influences from films and the sounds of the 50s and 60s and memories from Ocean Beach.

We caught up with Sonny Smith, frontman of Sonny and the Sunsets, to talk about filmmaking, his Spanish band, and the cassette tape revival.

Sonny and the Sunsets plays at the Chapel on July 12.

Antenna to the Afterworld was released over a year ago now, are you working on new material?

Yeah, I just finished the next record this week. I’m excited.

Are there any glaring differences on this record compared to your last?

It had a strange evolution; I’ll say that. It wasn’t my plan that these songs were going to be songs. I was writing short film scripts. I make short films and attach them together into one big film, like short cuts, and as I was writing the script and gathering actors and ideas. They kind of just morphed into songs, which has happened in the past. So all the songs are very narrative, like short stories with characters and stuff like that.

As far as sound, I’m using different musicians so it will inevitably be different, but it’s still rock ’n’ roll.

You seem to like releasing your albums on cassette tapes, do you see a revival with cassettes?

There already has been, I think. It seems like everything comes out on tape now. Burger Records have built a huge thing out of tapes. I think it’s exciting because tapes are so much easier and cheaper to put out and it helps labels release more bands than they ever would be able to.

It’s been a positive thing, it just gets added to the mix. It doesn’t seem like these things replace anything else, MP3s didn’t really replace CDs, and everyone’s stereo is now a record player, a laptop, a CD player, etc. Tapes are like the cockroach of media; they don’t go away. It’s also a keepsake for the fans to know there was a limited edition.

You gather lots of inspiration from screenwriting. Do you find a correlation between working on film and writing music?

It’s not just film, I have all kinds of interests in writing and sometimes they come out as short films, or plays, or monologues, or songs, and like this last record they don’t always end up where they started off.

I have plenty of times gone out to write songs and they ended up as a play, or wrote comic book ideas that became songs. Somewhere in the process, they are all kind of getting shifted around and affecting each other.

I feel like writing a screenplay could help generate great lyric ideas.

I think that’s usually the coolest stuff. When you make a song out of an idea from a screenplay, you’ll get something kind of original and interesting. When I was writing short films I wasn’t like ‘I’ll start writing these films and they’ll make great songs.’

In the video for “Natural Acts,” two characters are caught up in a serious tennis match. Are you an avid tennis player?

It has nothing to do with song, I just married the two ideas for the hell of it. I never really played tennis; I played a couple times. It’s just a fun rivalry.

I made another video for the song “Palm Reading” that had nothing to do with palm reading, it was a flute player versus a sax player with the same characters but in black and white.

Is there a specific era or any film directors that you try and emulate in your films or music videos?

I wish I could come close to emulating some of the stuff I love, but in the end I default to my own parameters of my ability. I love black and white movies of the early 50s and 60s, and noir stuff like that, but I wouldn’t begin to try and emulate them.

As a film person, as someone who has shot film and done projects, I’m a total amateur. I just do it for fun. I made a movie once. I wrote and directed and acted in it, it was feature length. It was such a piece of crap I never showed anyone.

Once I got chin deep in it I was like, “this is bad,” but I couldn’t abandon ship. Even when I edited it, I wanted to bail but a friend of mine gave me a lot of shit.

How was that experience for you?

It’s like a comedy waiting to happen. First of all I didn’t know anything about anything. I hired this actor and he bailed out the day before shooting so I basically became the lead actor.

I ended up making the main character a mute because I didn’t want to say all the lines and didn’t have time to memorize them all. The character also kept getting beat up in fights. He had this survival guilt because he accidentally killed someone by beating them up. So we staged all these fights and I ended up having a cracked rib after the third week of shooting.

Did you hire professional actors, aside from yourself?

I put a couple ads in the paper saying what I wanted and what their character was, but I didn’t realize I was putting the ads in a romance section. When I was holding these formal interviews at my friend’s restaurant, after the third one I realized they were showing up for sex. I also hired a sound man. I put up flyers at the art school and this Polish guy showed up. He didn’t know English very well, and halfway through we realized he was deaf.

You recently played a handful of gigs in Spain. Is that something you do frequently?

Australia and Europe are the places we go. I go to Europe two or three times a year because I have a Spanish band. I just kind of lucked out. It’s basically a Spanish version of the Sunsets, so that allows me to go Europe more often.

At this point we’ve toured the whole country, we end up doing cities I hadn’t done before and sometimes they’re really small, but we’ll also play Barcelona and Madrid, and Portugal is pretty exciting.

This year we’re going to Estonia for a festival out there. Its way up above Poland and Lithuania, kind of next to Finland, so it feels kind of Scandinavian, and also kind of Russian. It looks interesting to me.

Where was the best sunset you’ve ever seen?

Probably LA, where the smog and pollution makes everything looks really nice. It’s all pink and red and orange and blue.