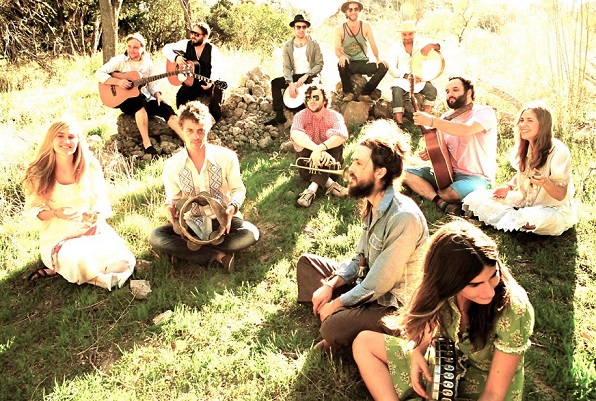 Indie folk rockers Edward Sharpe and the Magnetic Zeros stop at the America’s Cup Pavilion on September 20 for one of the last scheduled shows at the waterfront venue.

Beginning as a musical collective collaboration back in 2007 between lead vocalist Alex Ebert and singer Jade Castrinos, and growing into a revolving lineup of musicions, the group draws influences from roots rock and folk, evoking an image and sound of the 1960s and 70s hippie movement.

We recently spoke with guitarist Christian Letts to ask about touring with a large band, music on his summer playlist and a solo album produced by Marcus Mumford of Mumford & Sons.

How has being in a band with rotating members shaped how you approach songs?

There’s the constant core, always the same seven or eight of us. Everybody that plays with us has played with us for a long time and it’s not like everyone is going in and out all the time. Alex writes many songs and then whoever is around, we try to bring them to life. It always just depends on who’s there.

Does it ever get difficult to tour and perform with so many people?

It’s probably hell for our tour managers. I don’t know any better. The first band I’ve started in toured like this. It feels strange if anybody’s gone, you know? I really love having so many people in band. Ever since the beginning, our first trip we took was this bus Alex had [customized] to easily fit 20-something people.

Did you ever have mechanical difficulties?

We thought it had broke down but the gas gauge was broken. We actually tried to start the bus with Josh’s deodorant. We thought that was a possibility and it didn’t work.

We were in the the middle of Texas just stuck on the side of the road. So we ended up spending the night there and going to a gas station first thing in the morning.

You have known Alex since you were three years old. At what point did you decide to work together in a band?

Since we were kids, we were always drawing together. We went to these two very hippie schools where you always had to have an instrument that you were learning to play. Basically a recorder or some shit, you know?

We’ve been playing together ever since. Then we started the band Ima Robot a few years ago and I went to play in another band with Josh for a little while. Edward Sharpe probably started about seven years ago when I called him and he asked if I wanted to come over. He had been writing all this amazing shit.

If you could go back in time, what advice would you give your 18 year old self?

Oh my god that is so weird. I just did some hyno-therapy in London and visited my 15 year old self. I don’t know what I would say. “Don’t smoke.” (laughs).

We’re reaching the official end of summer. What’s on your summer playlist this year?

Mumford. I’ve been listening to Dawes a lot. Big Daddy Kane. I’ve been getting back into the 90s hip-hop lately. It’s always good. Just rebuilding shit I’ve lost over time.

What would you say is the biggest difference between the third Edward Sharpe album and the previous two?

What has been the high point and low point of your current tour?

Let’s focus on the high point—there’s been a couple. We did the Gentlemen of the Road show in Ontario with Mumford. That was one of my favorite shows we’ve played for sure. Cincinnati was a really good show too. It was really cold. I went outside and this kid introduced me to his grandmother who was 81 and it was her first concert ever. Her name was Marly-Anne and I hung out with her for a while. That was great.

The low point was probably I bought a new guitar and had it for 10 hours—a 1931 Tenor, it was beautiful. It fucking got broken on the way to rehearsals. Such a drag!

What are your plans for when the tour ends in October?

My fiance and I are planning our wedding, so we’re getting really heavy into that. And then, I’m going to finish my album with Marcus Mumford in November. He’s producing my solo album. I’m going to do a lot of writing, a lot of reading and a lot of boxing.

The band promised a collection of B-sides and unreleased songs before a fourth proper full-length. Any update on that effort?

Yeah, we have loads of them, so they’ll come out eventually over time. We basically have 42 songs and we’re trying to figure out what to with with them. The debate from the beginning was whether to put them all on one album or break them up. I’m sure we’ll get to recording another album, too, later.

When was the last time you visited San Francisco and what was your fondest memory?

I was there about 15 or 16 days ago. I had to get a flight to San Francisco to get a connecting flight to London. When I got there, one of my friends picked me up, we went to a tattoo shop and I got one. I took off to London about an hour after that.

I got a button on the side of my wrist because my sister’s name is Franchesca and her nickname is “crazy button.” We just call her button.

Edward Sharpe and the Magnetic Zeros perform at America’s Cup Pavilion on September 20. Tickets start at $37 and the show begins at 8pm.