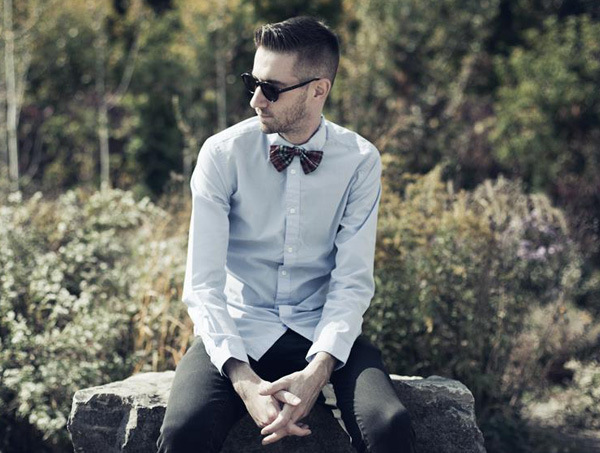 Future R&B producer Kastle moved to San Francisco from Pittsburgh for the good vibes and great food and coffee. The producer and DJ performs at the Independent on May 16 as part of his first North America live tour in support of his debut self-titled album.

When he’s not cruising around exploring the Mission District, Barrett Richards (Kastle) produces bass-drenched R&B and hip-hop by manipulating both original and sampled vocals with melodic variances of dubstep, house, garage, and cyber-pop in the mix. Last year, he formed his own electronic label, Symbols Recordings to distribute his music and collaborate with colleagues. We recently asked him about favorite local spots, the ideal performance venue and the well-timed release of his debut, self-titled album.

What made you decide to move to San Francisco to make your debut album?

I’ve been in San Francisco for about two years. I came to get inspired and to catch some of the San Francisco good vibes. I originally planned to come out here only for a a few months, but I basically just didn’t leave. I’m super inspired by the city. I love good coffee and good food, there’s no shortage of both.

What led to you creating your label Symbols?

I started the label in June of last year. I had been working on it conceptually for almost a year before that. We basically planned a strong launch with a release every three weeks, and for awhile it was like clockwork. My art director Joyce Su played a big part in keeping everything on time. Artwork can take a lot of time, but we had that vision from the start. It just kept unfolding naturally.

I’m not going to lie, it’s hard. I just have so much music that my friends send me. It’s incredible stuff. The stuff that I put out, I just feel compelled to do so.

What type of gear do you produce/mix on?

Most of my stuff is all in the box. I used to have a ton of hardware back in the day, but kinda got rid of all those. I still have my Roland Alpha Juno-1, a very classic synthesizer and I run a lot of Ableton and use a lot of sampling with Native Instruments Kontakt. I try not to become too comfortable with any one piece of gear or software.

I put most of my focus on melodies and the song-writing aspects. A lot of times when you write a good song, down to looking at it on a sheet of paper, sometimes the sounds aren’t even the most important things. It’s more about the feeling behind it.

How do you decide which songs to post as free downloads versus those for purchase?

The free downloads are a lot of times bootlegged remixes or fun things that I did. The ones that are previews are more actual releases and official remixes. At the end of the day, I just want people to listen to my music. I’m not looking to make all the sales, I just want people to hear it. More people listening means more people come out to the shows.

Do you have a favorite venue in San Francisco to play or see a show?

Rest in peace 222 Hyde; I always had a good time there. That’s where we did the Symbols launch party. We wanted that dark, basement vibe.

What’s the ideal venue or festival you’d like to perform at in the future?

I would love to perform at the SFMOMA and MOMA in New York. It would be fantastic to present Symbols artwork from Joyce and do a show.

Have you ever been starstruck playing alongside someone?

Probably. A year ago I played a show with 12th Planet and we had Photek as a special guest. It was right when he came back to do his new material and I basically handed off the decks to Photek.

Oh, there are two actually. The blueberry and lemon donuts at Rainbow are absolutely fantastic. They’re amazing. I get them regularly.

Where would you take a visitor to enjoy San Francisco on a Saturday night?

I always like to take people up through the Mission and down Valencia. Maybe hit up Ritual, Dog Eared Books and dinner at Garçon. That’s one of is my favorite French restaurants. That area is super concentrated with a lot of cool things.