Instant retro-cool images taken with Instagram and Hipstamatic are the Myspace photos of 2011. But New York-based mobile photographer Anton Kawasaki has made a name for himself with street photos – shot and edited solely on his iPhone – that are a contemporary slice of life.

Since 2010, Kawasaki has amassed over 67,000 Instagram followers, co-founded a mobile photographers’ collective, and is now at work on a new photo app.

He won the WIN-Initiative 10 Best 10 international photo competition earlier this year, which led to his current solo show at the Haus of Hipstamatic in SOMA, “All These Little Stories.”

I sat down for a chat with the former DC Comics writer/editor at last night’s opening reception — using only the iPhone Voice Memos and Notes apps.

How did you initially get into photography?

I’ve always been interested in photography but I just never thought I could do it myself. I have crutches because of an accident 20 years ago where I broke my back, and it was always difficult for me to hold cameras. The only ones I could use were these thin point-and-shoots and I’d always lose them. When the iPhone 3G came out I gave it as a present to my boyfriend and he started taking pictures with it. It sort of took off from there, we were Flickr addicts for a couple years until Instagram came out at the end of 2010. We were posting a lot there and experimenting with tons of apps like Hipstamatic.

There’s this phenomenon of instant gratification with Facebook, Twitter, pretty much everything now. Where do you think mobile photography fits in? Is this where the photography world is headed?

Absolutely. Social sharing sites and the fact that camera phones have more and more advanced features is definitely changing photography and changing the way we share information.

So you take photos with your iPhone and then you Photoshop them? What’s the process?

I do all the processing on my phone. With Hipstamatic I just use the app, but if I’m not using Hipstamatic there’s tons of apps to do basic stuff like cropping, lighting, or you can apply filters and adjust the levels, so if you just want a little bit of something you can do that and then stack them on top of each other. I use a bunch of paid and free apps. Using an iPhone is like carrying 50 different cameras in your pocket. You can really achieve just about any look that you want. It’s amazing. I love the fact that it’s straight out of your pocket, an instant share.

Did you learn just by trial-and-error?

Yeah, there are so many lenses and films that I just played with different ones. For this show I used the John S lens and BlacKeys SuperGrain film for the black & white photos, and then for color I used the Tejas lens — it’s a limited edition lens they did for South by Southwest — and the Blanko film.

What do you look for when you’re shooting?

My photos are almost all candid street shots of unusual characters, or just a moment, something that’s a little special, not just people walking. I try to capture something that’ll evoke some kind of emotion. I’ve been known to take very humorous pictures of people in goofy situations.

I read that you don’t interrupt people to take their photos.

They never know I’m taking their picture. I’ve learned the art of being sneaky, and I get very close. You can pretend to be texting or playing a game and people don’t know.

AK: It’s a photo called “The Future Soldier.” It’s a picture of a little boy with all these marines and other people surrounding him, and he has this big rifle in his hand. When people see it, at first they’re like, where did you take this, was this Afghanistan or something? But it was actually taken in the middle of Times Square during Fleet Week, and they were doing demonstrations of these weapons — that obviously weren’t loaded — but you just see this kid and he’s so happy. I was kind of horrified because not only was it this little kid but there were pregnant women and old people holding guns. [Laughs] That picture of the boy was one I was really proud of. 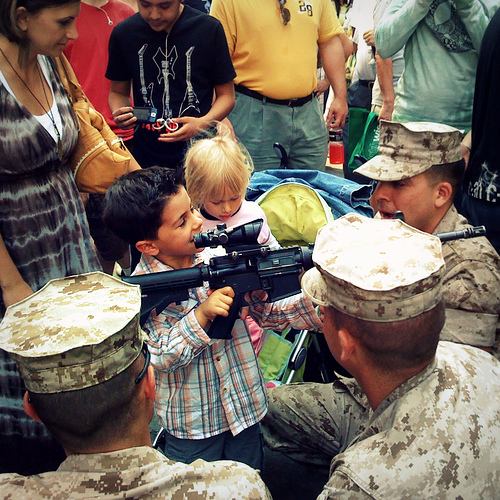 Can you tell me about the Mobile Photography Group?

Earlier this summer, me and 11 other mobile photographers just banded together from various places. Some of them have been online friends for years. One or two of them I had no interaction with at all beforehand and I’ve gotten to know them since. They’re all great people from all around the world — Paris, Australia, everywhere. We look to collective photographer groups like Magnum and we want to do the mobile photo version of that. Our plan is to eventually put out one book of all of our work and then put out little books of maybe two or three of us, maybe do some group exhibits and eventually expand the group to more people.

Whose idea was the MoPho app and when can we expect the launch?

Reuven Moskowitz and Josh Friedman in New York asked me to help them sort of evangelize the app. It’s not a typical processing app, it takes photos you’ve already processed and then you can basically make products out of them – prints of various sizes, an iPhone case with a picture, t-shirts, coasters. You upload the photo, crop it, create it, you can see a 3D visual interpretation and then just buy it on your phone. They have more apps that they hope to launch later that I think are gonna be really cool and really beneficial to iPhone photographers.

So is MoPho your day job now?

I’m the social media guy, the writer, the idea helper. I’m actually doing some mobile photography for hire as well. There are a lot of companies and agencies now that are specifically looking for mobile photography because they want something that’s immediate and that can be shared immediately. There’s a company that my friends are starting up to pair mobile photographers with brands and companies. So for example if a company wanted to use a mobile photographer they could hire me or others to take pictures at events and upload them right away.

Some people would say this isn’t “real” photography – anyone off the street with no photo background can just start taking pictures and edit them the way a professional would.

You either have it or you don’t. There’s definitely tons of people out there who are seeing how easy it is to take photos on the iPhone and think that just because they can, that means they’re a photographer. And I really think that there’s more than just pointing and shooting something. It’s all about composition and lighting and subject matter.

What do you think it means that a mobile photographer won the Ten Best Ten contest over everybody else?

I don’t think it means anything. Photography in general is not about what camera you use. It’s about that final image. Does it speak to you? Then it doesn’t matter what device you used to take it.

JUL 31 GET IT?! GAMESHOW at Cobb's Comedy Club
The Best Events
Every Week in Your Inbox