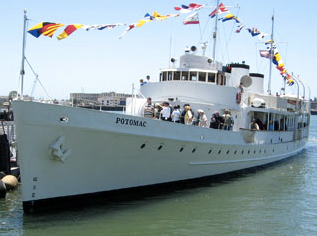 The “Floating White House” was originally commissioned the USCG Cutter Electra in 1934.  In 1936 it was renamed the USS Potomac and served as Franklin Delano Roosevelt’s Presidential Yacht until his death in 1945.

More than a quarter of a million people have visited and sailed aboard the former President’s beloved "Floating White House," the USS Potomac, since it opened to the public in the summer of 1995. $5 million was spent over a 12-year period to restore the 165-foot-long vessel as a memorial to the president who authored the New Deal and led the United States during the Great Depression and the World War II years. Join us aboard this National Historic Landmark for a cruise on the Bay.
read more show less