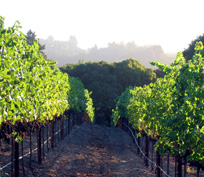 Santa Cruz Mountain Vineyard has been making European-style, food-friendly, cellar-worthy wines since 1975. We are well-known for making Pinot Noir that can age beautifully for three decades.Our basic philosophy is that wine should dance with food and make the food/wine experience more than a sum of the ingredients. This means making wines with moderate alcohol and oak so that the true characteristics of the grape varieties are expressed. You won’t find any high-alcohol, jammy, oaky wines here.In 2008 we launched a second brand, Quinta Cruz, which features only varieties that originated on the Iberian Peninsula but are now grown here in California. These Portuguese and Spanish varieties include Tempranillo, Touriga Nacional, Touriga Franca, Souzao, Graciano, and Tinto Cão.After more-or-less hiding away in the mountains for 32 years, the winery moved into the city of Santa Cruz in 2008 and opened the first tasting room in our long history. We are located in an area where you can walk to many other tasting rooms nearby and are only a few blocks from the beach and Natural Bridges State Park.