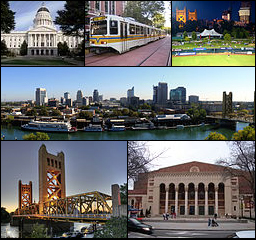 Sacramento is the capital city of the U.S. state of California and the seat of government of Sacramento County. It is at the confluence of the Sacramento River and the American River in the northern portion of California's expansive Central Valley. Its estimated 2014 population of 485,199 made it the sixth-largest city in California.[9] Sacramento is the cultural and economic core of the Sacramento metropolitan area, which includes seven counties with a 2010 population of 2,414,783. Its metropolitan area is the fourth largest in California after the Greater Los Angeles area, the San Francisco Bay Area, and the San Diego metropolitan area, and is the 27th largest in the United States. In 2002, the Civil Rights Project at Harvard University conducted for TIME magazine named Sacramento "America's Most Diverse City". - https://en.wikipedia.org/wiki/Sacramento,_California