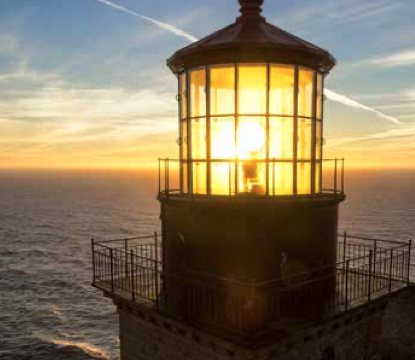 The Point Sur Lightstation sits 361 feet above the surf on a large volcanic rock. Point Sur is the only complete turn-of-the century Lightstation open to the public in California, and is on the National Register of Historic Places. First lit on August 1, 1889, the lighthouse has remained in continuous operation. Lighthouse keepers and their families lived at the site from 1889 to 1974 when the lighthouse was automated. Today the Lightstation buildings are being restored through the efforts of park staff, State Park volunteers and the non-profit Central Coast Lighthouse Keepers. The Lightstation is open to the public only through docent-led tours.

Established in 1957, the former Point Sur Naval Facility (NAVFAC) was once part of a worldwide network of defensive listening stations that tracked the movement of Soviet submarines. The Point Sur NAVFAC is one of the remaining Sound Surveillance System (SOSUS) facilities, and the only one remaining on the West Coast. For the most part, other SOSUS facilities were parts of larger military complexes, while Point Sur was established as a stand-alone, self-sufficient base.

Except for one building retained by the U. S. Navy, the former Pt. Sur NAVFAC was transferred to State Parks in 2000. The only buildings currently being used by State Parks are some of the facility's housing buildings. The facility is not open to the public.

Location-Directions
The park is located 19 miles south of Carmel along Highway 1.

Seasons/Climate/Recommended Clothing
The weather can be changeable. Layered clothing is advised.

Facilities - Activities
Three hour walking tours of the facilities are available on weekends year-round, and seasonally on Wednesdays. To attend a tour, meet along the west side of Highway 1 at the locked gate 19 miles south of Rio Road in Carmel and 1/4 mile north of Point Sur Naval facility. Space is limited -- arrive 30 minutes early. Call the park for tour information.