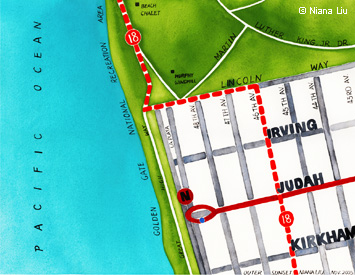 In part due to the heavy fog which blankets the area throughout the year, much of the Sunset District has developed a distinctly quiet and residential character. The vast size of the district, however, has fostered the development of several varied and vibrant neighborhoods. There are a few distinct areas of the Sunset. Invariably, there's a cluster of businesses near 19th Avenue and near the ocean, there's another cluster of commerce. Another big street separating the district is Sunset Blvd. which runs north to south, from Golden Gate Park, south to Lake Merced.

One area on the north side is Parkside where, as the name portends, it's along Golden Gate Park from 19th Avenue to the Ocean. On the southern end the San Francisco Zoo, Stern Grove and Sloat Blvd. form the southern border of the district.

Sandwiched in between are three "main" streets: Judah, Noriega, and Taraval. The eastern part on those streets near 19th Avenue are full of businesses of all kinds. There's more bustle around the east side because of its proximity to the thoroughfare. At the west end of the Sunset (near Ocean Beach), the vibe and shops bear a close resemblance to a beach town; surfers and nature lovers brave the cool sea spray. There's a combination of city living convenience and raw outdoor lifestyle.