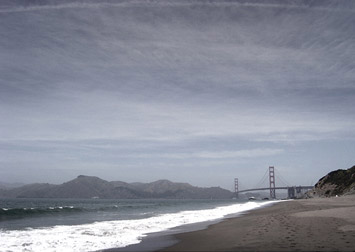 The Outer Richmond is in many ways defined by its relation to parks and open spaces; bordered by Golden Gate Park on the south, the Pacific Ocean to the west, the Presidio Greenbelt to the east and the Presidio of San Francisco to the north. The district has a feeling of being encapsulated by nature.

The main commercial strips are Clement Street and Geary Boulevard run parallel but as one ventures further west, the shops on Clement fizzle out. Balboa Street, anchored by the Balboa Theater, has a small downtown feel, with little cafes, eateries and shops.

Tip: Park in Golden Gate Park, walk north to either Balboa or Geary to get a bite to eat or drink. The walking excursions in this district are never ending: Land's End, near the Legion of Honor, the north part of Golden Gate Park, and on the back side of the Presidio, near the Presidio Golf Course. The Land's End trails offer many incredible views of the Golden Gate and across the mouth of the bay toward Kirby Cove. Below Land's End to the northeast is a great stretch of beach from China Beach to Baker Beach (sometimes nude) with glimpses of the Golden Gate Bridge and a sandy beach. On a clear day you can see the Farallon Islands.