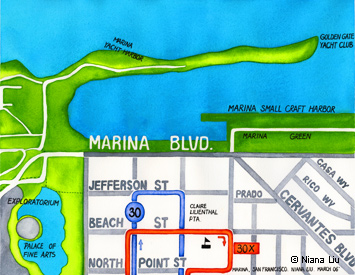 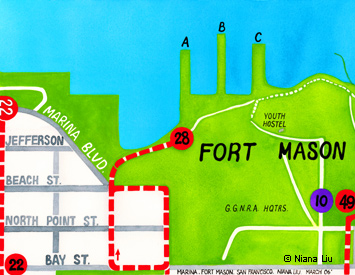 Home to a fashionable set of young professionals, socialites and bankers, the Marina has one of the most well-known zip codes in the city. One of the city's more affluent neighborhoods, residents here tend toward cocktail parties, jogging along the water, shopping on Chestnut and Union Streets and dining at posh restaurants like Greens.

Cow Hollow is usually considered to be Union Street while the Marina is Chestnut Streets. We group them together as the Marina District and both streets are two of San Francisco's best places to shop - from classy boutiques to incredible specialty stores galore.

One of the greatest attractions for non-residents is the strikingly ethereal Palace of Fine Arts; where live music wafts through the air, swans grace the man-made lake and couples pose for their wedding photos. While the Marina catches flack from the other, more alternative, side of San Francisco, the good life is alive and well. The Presidio is also right next to the Marina District if you want to take a stroll in the woods.

To the east is Fort Mason, which houses an incredible center for the arts (theatre, crafts, paintings, music, and more).