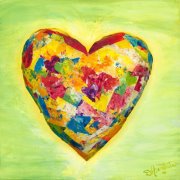 As a performing dancer at the age of 3, Debbie began her career of bringing smiles to the hearts of many while winning first place in a Baby Beauty contest in San Jose California.

By five she was making colorful gifts of art for her family using scraps heart shaped tissue paper on recycled wood until she discovered that dance performance on stage would attract considerably more attention.

It was not till the age of 35 she would uncover her deepest passion for dancing with her hands and fingers on canvas as her life calling.

Today her heart works uplift, inspire and bring hope to the lives of collectors worldwide.

Whether painting a family of hearts, a sunflower or Tuscan Landscape you can be sure that she pours her heart & soul into every thing she creates!

Commissioned by 1000’s of people across the world, she is best know for her signature style Heart Portraits, wherein she captures the essence of couples, families & individuals, celebrating them on canvas!
read more show less