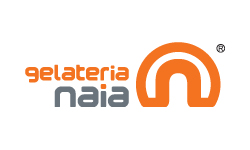 We started in downtown Berkeley in 2002 and our success has allowed us to open four more stores in Walnut Creek and San Francisco. We are also proudly featured at select Whole Foods Markets in the Bay Area and Sacramento within their bakery's gelato bar. Naia is the name of our first daughter who was born at the same time as our first store.

We started out simply trying to find authentic gelato in the Bay Area, and could not. So we decided to make it ourselves. We met with and learned from master gelato artisans from Italy, and visited local dairies, farms and chocolate makers. We took university classes in Italian and American ice cream. And, after trying everything and cultivating our own personal recipes, we found that there are only two simple components to an outstanding gelato: pure, natural ingredients and small, artisanal batches.

Many folks ask us whether our gelato is authentically Italian. Gelato comes in all shapes and styles in Italy; it's a little like asking what an authentic American burger is. We also get asked what region of Italy our gelato is from. We do share much in common with Sicilian gelato since that was our base to start from.

But rather than calling our gelato "Sicilian" or "Roman" or "Neapolitan" we prefer to call the Italian region we're from "California".

That is, if one took a master gelato artisan from Sicily or Naples and transplanted them in Berkeley, they would not import all of their milk, sugar, fruit and other ingredients over seaport containers or airplanes, burning up fuel and freshness. Nor would they dehydrate their gelato and add synthetic products for easy reconstitution like other modern gelato ‘artisans’.

Classical Italian food is regionalized because the fresh ingredients around each region differ. The master gelato artisan would look around their new home, use local dairies and fruit growers, find the freshest ingredients, make the finest gelato, and make it in small batches: pistachios from the Central Valley; single malt whiskeys from Alameda artisan distilleries; couverture from San Francisco chocolate makers; and coffee beans from Oakland microroasters. And that is what we do.
read more show less