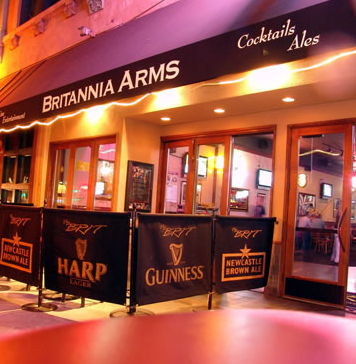 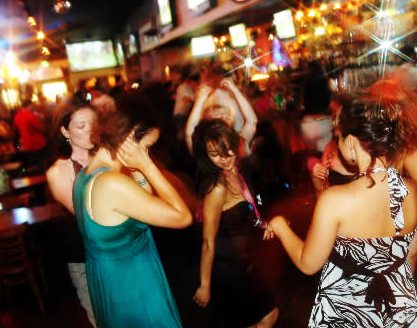 When it comes to eating, drinking and being merry while watching a big game in downtown San Jose, this is the place to be. With a huge interior and equally massive patio, indoor and outdoor bar, and TV’s plastered on every wall, there’s almost always somewhere to sit (or stand) and catch the action. The Almaden location is smaller and more of a neighborhood bar—but is still a great place to watch sports. Whenever in doubt about where to watch your favorite team, just head to the Brit.

Britannia Arms, affectionately known as The Brit by faithful regulars, brings British pub flavor to downtown San Jose. Featuring 19 beers on tap, a full bar and a menu with pub grub classics from across the pond, there’s something for everyone here. A 3,000-square-foot outdoor patio provides a welcome opportunity for fresh air and several interior TVs offer an opportunity to catch up on sporting events from around the world. It's proximity to SAP Center make it the perfect spot to start the night before events and Sharks games.

The skilled bartenders are friendly, as are the patrons that make up the majority of the often packed bar and back patio area. Britannia Arms sports an impressive import tap beer list with some domestics thrown in for less discerning palates and the liquor selection—especially the scotch and whiskey collections from the Isles—isn't too shabby either. On the weekends patrons cram into this downtown San Jose bar for the singles scene, the DJ fueled dancing and live music acts of both the original and cover band varieties. Earlier in the week Britannia Arms restaurant and bar caters to belt it out karaoke crooners and wannabe rockstars.

Patrons of all stripes also hit The Brit for some down home British Isle fare like fish and chips, bangers and shepherds pie, but since this bar resides in California there are numerous healthier options on the menu right alongside Britannia Arms' traditional artery clogging favorites.

The premier Sports Bar & British Pub.  Between fish & chips and pints of ale, there’s something about a good pub that puts a smile on people’s faces – and it’s not just the pints that do it. Obviously in on this secret of greatness, The Brit floats a bit of the Isles across the sea and transplants it in San Jose, offering a killer hangout and gathering spot in the British pub tradition.Proudly boasting an impressive selection of imported taps and domestics, the Brit also keeps a fully stocked bar inside and outside patio.

Calendar of Events at The Brit Downtown SJ

The Brit also serves as the stomping grounds for avid football (the kicking kind, not the American kind) fans, opening up early for Euro and World Cup action; but don’t worry all you soccer-haters, favorite sports from this side of the pond also get their airtime on one of more than twenty HD Tv's and 2 Big Screens. Britannia Arms keeps the TVs tuned to sports all day long, offering a constant supply of everything from baseball and basketball to good ol’ American football and hockey as well as all UFC events. Just a walk from the  HP Pavilion, The Brit is also a favorite pre- and post-game watering hole for Sharks fans on game days.Serving half-price appetizers and dollar-off drinks during happy hour, The Brit’s location in downtown San Jose makes it appealing to the after-work crowd looking to grab a pint.

Easily accessible from Highways 87 and 280, The Brit is a favorite of seasoned downtown drinkers, sports fans and singles alike, with a nearly unbeatable selection of drafts and liquors that help keep the bar a mainstay in the downtown San Jose nightlife scene.