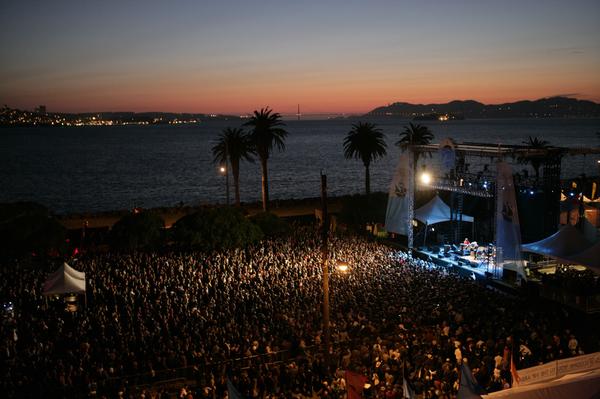 Another Planet Entertainment, LLC (Another Planet) was created on July 18, 2003 when Gregg W. Perloff, President/CEO of Bill Graham Presents, left to build his own company. Shortly thereafter he was joined by longtime colleagues at Bill Graham Presents Sherry Wasserman, former Senior VP and Head of Concert Production at BGP, and Steve Welkom, former Senior VP of Administration and Business Development for BGP. Their staff was quickly expanded by adding Mary Conde, an acknowledged industry favorite as Production Director, and Gregg's former assistant, Veronice Satoor, as Box Office Manager. Later they were joined by Allen Scott and Bryan Duquette in Booking, Danielle Madeira and Johanna Vater in Marketing and Advertising, and Melany Pearce, Eric Barleen, and Mike Lieberman in Administration.

On August 16, 2003, Another Planet, in a collaborative effort with Giants Enterprises, presented its first concert featuring Bruce Springsteen & The E Street Band at Pacific Bell Park in San Francisco.

Since its inception, Another Planet has produced over 500 events with artists ranging from Neil Young, Bob Dylan, The Eagles, and Simon & Garfunkel to Metallica, Phish, Radiohead, and Jack Johnson. This in addition to hundreds of shows with developing artists at The Independent — our San Francisco showcase club.

From Alison Krauss & Union Station to Kanye West, from Depeche Mode to Café Tacuba, Another Planet has presented a wide spectrum of today's top entertainers. Another Planet was selected by the Dave Matthews Band to produce and promote its major outdoor benefit concert at Golden Gate Park in San Francisco. In addition, Another Planet is the exclusive promoter for the Greek Theatre, an 8,500 capacity outdoor amphitheatre in Berkeley, The Independent, a 500 capacity nightclub in San Francisco, and the 8,000 capacity Harvey's Outdoor Amphitheatre in Lake Tahoe. In 2008 Another Planet, in conjunction with the city of Oakland, will reopen and become the exclusive promoters of the 2,500 capacity venue, The Fox Theatre in Oakland.

In 2006 Another Planet presented the Northern California debut of Titanic: The Artifact Exhibition featuring more than 300 authentic artifacts from the luxury liner at the Metreon in San Francisco. This blockbuster exhibit resided on the 4th floor of the Metreon for an eight month run. In 2007 Another Planet with Bay Area Productions produced the highly successful national tour for Academy Award winner Jamie Foxx. Also in 2007, Another Planet in conjunction with Noise Pop, produced the inaugural two-day music festival on Treasure Island in San Francisco, the Treasure Island Music Festival

In its first year of operation, Another Planet Entertainment was honored to be selected by a vote of its peers in the concert industry as "Promoter of the Year" in the United States by Pollstar Magazine.
read more show less