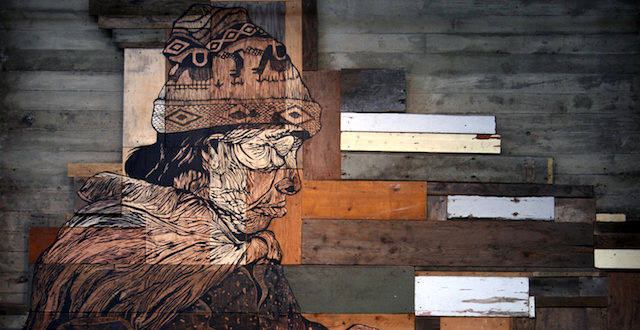 Printmaking is one of the oldest art forms. On Saturday, March 23rd, a group of artists who use printmaking in their work will come together for “Press On” at Heron Arts, paying tribute to this ancient art form.

“Press On” explores how printmaking can manifest on paper, wood, and even alongside twine and mirrors, with a fluidity than spans theme and generation.

Printmaking been around since the 2nd century, when paper was first invented in China. Some artists use printmaking as a vehicle for political protest, while others supplement other mediums with it to create original, textured pieces. 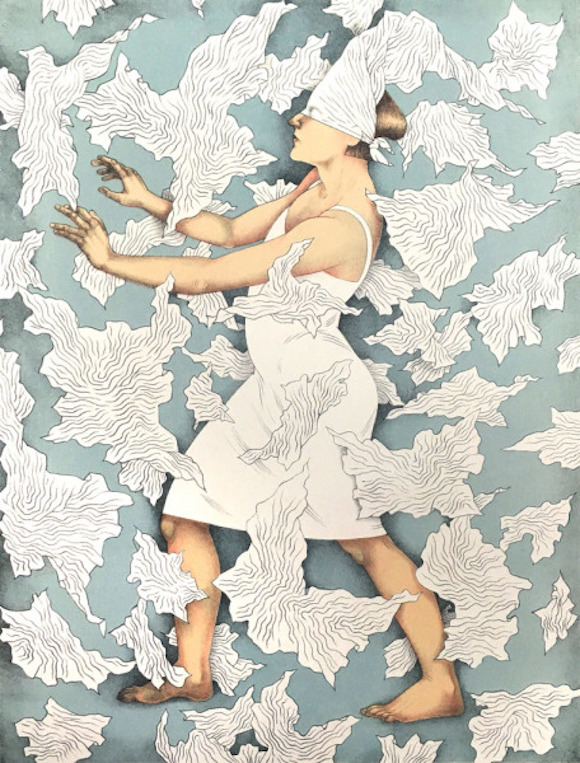 Her pieces tell stories of strong female figures who have kept the artifacts of humanity alive throughout the ages. Through this, she attempts to remind viewers of the pride in working with your hands—an act that is slowly being forgotten.

“It’s so important to keep alive these handmade traditions, especially as our world is becoming more dependent on technology,” said McNall. “There’s something irreplaceable about a hand made item; it can hold such power and personal importance.”

It can also be a versatile tool, broadly employed to create graphic, illustrative imagery with varying intention. One design can be made to feel tiny and sequential, while another can look enormous and ephemeral, depending on the application of the print. 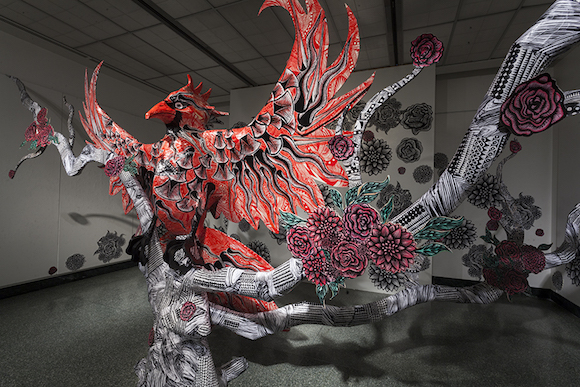 Dennis McNett, who has contributed as a visiting artist lecturer at over 30 universities, as well as displayed work on dozens of Antihero skateboards and murals, said he found printmaking almost 30 years ago—partly because he was too impatient to let paint dry. When he drew with charcoal, he’d snap it because he was pressing too hard.

“Then, one of the professors carved this little block, rolled ink on the surface and ran it through a press,” said McNett. “When he pulled the print off the block, it had the same raw graphic quality as all the stuff I was into. I was hooked right then.” 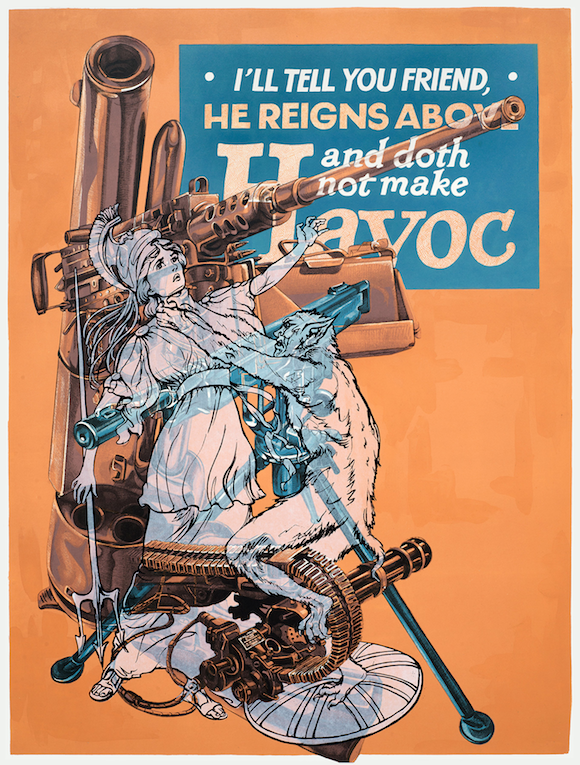 Ericka Walker, who was born and raised in Hartford, Wisconsin, and now works as an associate professor of art, also finds the medium attractive to a lot of people right now in a time where everything is so digitally mediated. You can make something look like it was made by a computer, except it’s still made from scratch with your hands.

“Artists who value a plurality of tools over particularity of media or technique are often drawn to printmaking as a valuable part of their professional practice,” said Walker. “You can really make, amend, and reproduce any kind of image imaginable.”

She also sees her current use of printmaking as a direct response to its historical context. In the past, it was used in propaganda posters and mailings to promote colonialism and an American militaristic identity.

‘The forces of expansion, industrial and agricultural revolution, and imperialism that made for my middle-American story, also composed a nostalgic image of America that has never been particularly honest,” said Walker. “As a direct benefactor of these variations on “prosperity,” I found myself at once grateful and ashamed.

The mixed bag of reactions that came with this realization led Walker to explore how visual culture presents itself as a product of the times—especially when that era may be filled with confusion or disillusion.

Similarly, other artists feel a renaissance is happening within printmaking, as they watch a resilient art community begin to flourish throughout the Bay Area.

“Printmaking throughout history becomes especially important when we are going through difficult political times,” said McNall. “It’s a great tool of resistance and spreading awareness to the masses.”

Erik Otto, an American abstract artist who works in mixed-media painting, neon sculpture, and installation, became infatuated with printmaking at a young age after learning he might live with a serious degenerative eye disorder.

Over time, it became a way for him to play with the subtle tricks of the human eye in composition, and connect with his craft on a more personal level. 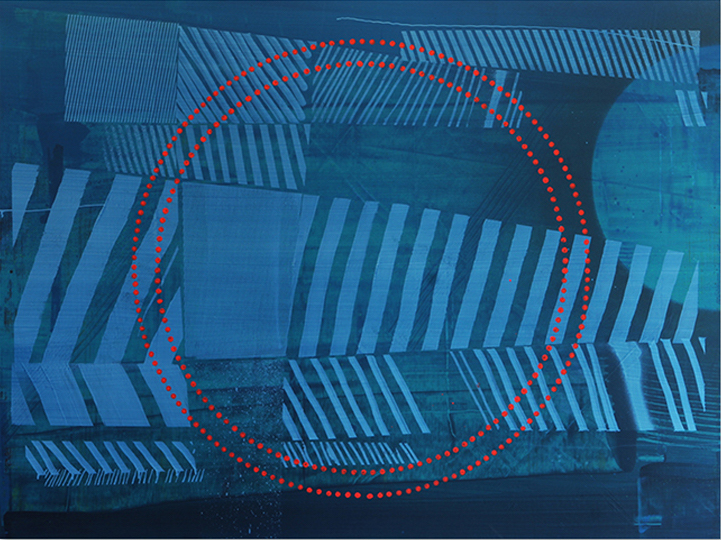 “The circle is in all of my work, pretty much…it’s symbolic of moments in life that are coming and going, while representing a positive outlook—an openness to change and that everything is all good,” said Otto. “Through the evolution of making marks, the circle just made the most sense to me in just trying to tie in that feeling I can’t quite describe of being completely at peace.”

Beyond the intimate nature of the work, printmaking also naturally engenders artists to come together—if only by virtue of relying on one another to make their art work.

“I don’t know about life lessons from the medium, but one thing that is true about printmaking is that it is communal a lot of the time,” said McNett. ‘This is because sometimes it takes more than one person to pull prints…there’s a press that multiple people may be using, there’s a shop, etc.”

Over time, printmaking has also become more accessible for artists with limited resources who are just starting out, and equally affordable for those looking to ramp up their art collection—a pastime that’s become somewhat of a dying trade.

“As time goes on and as much as we in the ‘inner circle’ would love to believe that as technology advances, we want people to appreciate things made by hand more,” said Otto. “Yes, in one way that’s correct, but show me with the money.”

“We’re living in an age where you can take a picture of your dog, upload it to the web, have it print on a shower curtain, and then arrive in a box on your doorstep in two days,” said Otto.

Despite this, he’s hopeful there will always be people who appreciate the intrinsic value in how long it takes to do things. “Whether someone stops for a second (or a minute) when they see something that just moves them and they don’t have to describe it with a feeling, or even with words—there’s something to that,” he said. 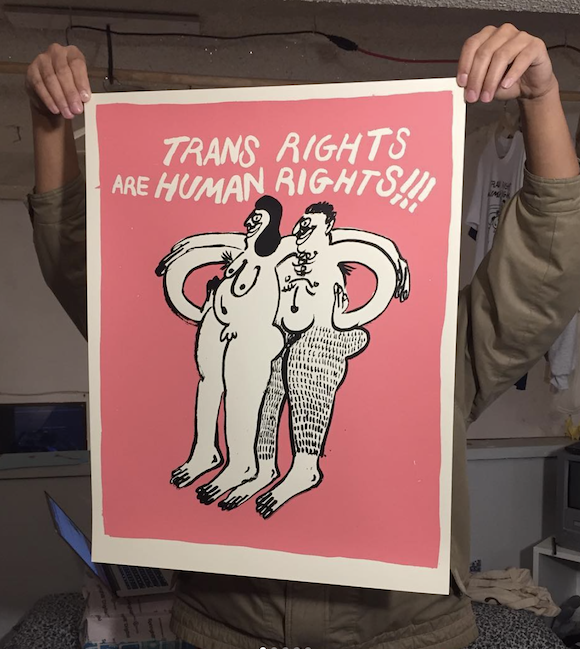 Heron Arts is located at 7 Heron Street in SoMa. The opening reception will be Saturday March 23rd, from 6:30-9:30pm. The exhibition is free and open to the public. “Press On” will be on display until April 20th, open for viewing on Saturdays from 11am-4pm, and on weekdays by appointment only.