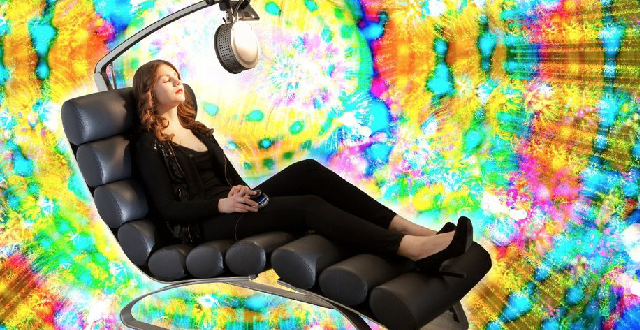 It’s hard to think about engineering futuristic worlds without trying to figure out how virtual reality (VR) will fit into this new technological era. And how will virtual reality play a part in art, as we know it? On Saturday, February 18th, ArtandVR: A Futurist Festival will explore precisely this vibrant and trippy gray area.

At ArtandVR be prepared to have your mind-blown by this immersive multi-media showcase of electronic music, visionary speakers and interactive art.

The event, hosted at HACK Temple, a 100-year-old church recently purchased by a Silicon Valley investor, will unveil cutting edge advancements in sound engineering, visual art, and motion design—with more than a few simulated virtual reality experiences, demos and art installations brought forth by both artists and technologists.

One interactive display called “The Price of Freedom” places you in the body of a CIA operative on a dangerous mission involving mind control, modeled after actual Cold War-era trials. Another, built by Nick Shelton, has you navigating complex geometrical sub-worlds where the only limitation is your imagination.

In Shelton’s work, the repeated mirroring and distortion of light gradually helps a fractal system to emerge. “The experience becomes a search through the system’s state of space, looking for balance and harmony, like a stroll through a garden,” he says.

Sip tea and talk crystals at RonJon’s Crystal Tea Service, and watch Cerebellum Projekt, an acrobatic fire-eating duo known for blending sound and performance, bring a circus act to match their bassy melodies that move freely through genres like funk, reggae and glitch.

Many of the installations have been on display at LED-blanketed gatherings like Lighting in a Bottle, Burning Man, and Oakland’s Autumn Lights Festival, while others are making their first public appearance.

Charna Cassell will unveil the one and only “Lucia No.3 System” in the Bay Area. The environment transports participants into a meditative altered state of perception while in a feeling of deep focus and relaxation. Similar to what one might experience in a sensory deprivation tank, the meditator is faced with the artistry of one’s own consciousness, as sound enhances their experience to create the illusion of seeing music.

In addition, Futurist-filmmaker Brett Leonard, creator of the foreboding sci-fi 90s cult classic The Lawnmower Man, will share his understanding of nanotechnology, as well as the positive and negative consequences of VR to avoid a dystopian future.

“VR must be the medium to awaken the inter-connected consciousness and freedom of the emerging Global Human,” he said. “If not, it could be the ultimate medium of Global Control.”

HACK Temple has been hosting events for over a year, encouraging membership and growth of international businesses by granting insider access to their Silicon Valley resources. The festival is just one, in a line of their events, celebrating the progress being made at the intersection of art and technology.

Tickets start at $30 for the event, which will run from 7-11pm on Saturday, February 18th, at the funky church location at 906 Broadway. More information about ArtandVR can be found here.