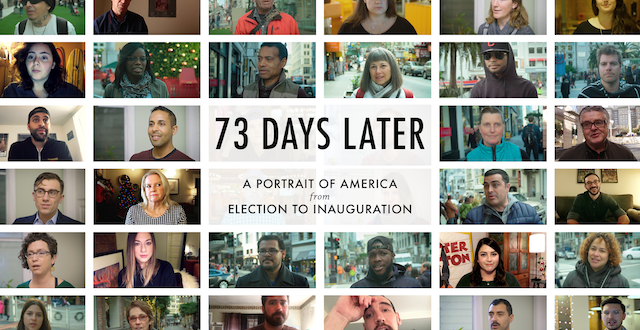 One week from now, business magnate and television personality Donald Trump will be sworn into office as the 45th President of the United States.

In the days that follow, the most divisive question still seems to be “how did this happen?” In fact, if you do an online search right now you’ll find it’s the most relevant conversation circling the Internet.

On January 22nd, one Bay Area film crew will begin aggregating hundreds of videos for “73 Days Later”, a crowd-sourced documentary chronicling a wide array of political perspectives and reactions from everyday people across the country—all happening within the 73 days between November’s Presidential Election and the January 20th Presidential Inauguration.

Contributors of every age (at least over 18), race, sexual orientation and belief system are invited to submit a video in response to some of the most pressing questions that have come to define this historic chapter in American politics.

Do you think America will become more divided or more united under the Trump Administration? Has the election of Donald Trump changed the way you feel about America?

The only guideline: be your honest, uncensored self.

Co-creator and Producer (and a former editor here at SF Station) Baily Hopkins admits the film started out as a simple project, but has grown into something much larger. Upon realizing Former Secretary of State Hillary Clinton would not be the 2017 presidential nominee, the crew set out to better understand those viewpoints outside what she terms “the bubble”.

“We’re just trying to answer a question a lot of people have on their minds right now and that’s, how do we try to listen again?” she said. “We were talking just the other night about how much we’ve personally learned about the state of America and we’re just so excited to share that— whatever it is.”

The documentary continues to gain momentum with coverage from KQED and the addition of film teams in cities like New York and Los Angeles. Since launching its website and Facebook page last month, it’s received over 1,000 likes and collected more than 100 interviews, as well as extended a call to states like Ohio, Wisconsin, North Dakota and Utah for additional footage.

Interviews with the crew and video submissions through YouTube and Dropbox are being accepted until January 22nd, trailing Trump’s transition into office. Social contributors are also encouraged to post images through Instagram using #73DaysLater.

Read about project updates and inquire about how you can get involved with filmmaking or community organizing here.