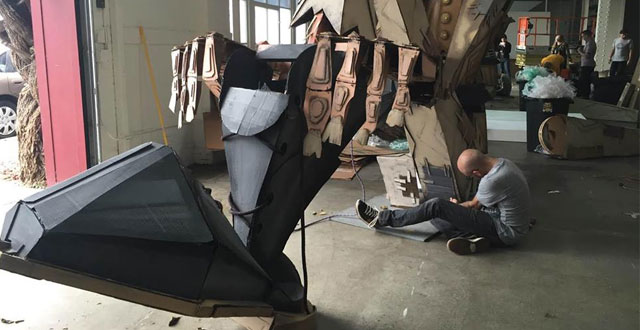 The television show Pee-Wee’s Playhouse is best remembered for its off-brand eccentricity, offering kids of the late 80s a chance to suspend reality along with its somewhat neurotic main character, Pee-Wee, played by actor Paul Reubens.

Yet, with atypical characters like Randy, a bullying redheaded ventriloquist dummy, and Dirty Dog, a smooth-talking, jazz-playing beatnik canine, the show’s set design nurtured another following entirely on its own.

Much of this legacy is thanks to artist Wayne White, the man behind many of the show’s puppets, and an artist thoroughly unconventional in his own right.

This Saturday, July 11th, White will be in San Francisco for the opening reception of his art show, dubbed “Ass Kicking Contest”, at Heron Arts gallery from 7 to 10pm. The exhibition will debut a fusion of White’s puppetry and paintings, including a 15-foot installation that will engulf the better part of the gallery space. The show will run from July 11 through August 8 and will also feature artwork done by his artist son, Woodrow.

“I’ve always been building giant sets and putting puppets in them, but now I get to call it art,” White says.

White has been something of an artistic jack-of-all-trades for the better part of the last two decades, having begun his career in painting and illustration, and later skyrocketing to fame with design work for Pee-Wee’s Playhouse which led him to win three Emmys.

White grew up in Chattanooga, Tennessee, later moving to New York City to polish his artistic career. Since then, his body of work has made a niche for itself where historical and traditional aspects of the American South mingle with post-modernist abstractions.

In a recent series called ‘Word Paintings’, short statements are constructed around serene landscapes in block letter text vaguely reminiscent of WordArt. One such piece, entitled ‘Dude or Chick’ (question mark not included), appears to sprout from behind the trees of an 18th century-style backdrop depicting a horse drawn carriage and stream.

While White’s paintings often force genres to collide, he allows the same to materialize in his puppetry, bringing to life unique characters that don’t regularly fall in line with the generalities expected to define them. In White’s eyes, there is no true distinction between the individual pieces and the whole of his work—they are all somewhat related.

“I know it sounds simplistic, but it comes from the same source, whether its puppets or painting,” White says. “What the common thread is, is the sense of storytelling and making up stories that comment on the human predicament.”

In conjunction with White’s showing, his son and fellow artist, Woodrow, will also exhibit his paintings at Heron Arts.

A native of Los Angeles, Woodrow now lives in Oakland and works full-time as an artist. Not unsurprisingly, his creative vision has found its passageways through much of the work he’s done in other mediums, such as film and installation art.

Woodrow describes his exhibition at Heron Arts as exploring the “concept of Big Foot”, while not exactly being explicit in featuring Big Foot himself. The paintings in his series depict mythical figures in confrontation with more modern, structured environments to cause a rift in expectations.

Growing up around Hollywood sets, Woodrow says he was intrigued with actors as they morphed in and out of costume to reveal their true identities and his paintings are a reflection of this duality. “Some people might see it as disappointing to sort of peek behind the curtain,” he says, “But there’s a certain kind of realness to seeing someone underneath the costume instead of underneath the façade.”

While Wayne and Woodrow’s work run the gamut of history and popular culture, “Ass Kicking Contest” will ultimately focus on how close artistic relationships often draw influence from one another to shape an individual’s work—in this case with the work of father and son.

This is the first of many large-scale art exhibits to grace SOMA’s Heron Arts space. In an attempt to bring more installation pieces to the gallery, as well as provide better support networks for existing artists, gallery owner Mark Slee, an early Facebook developer, has appointed a fresh team of curators to help launch more ambitious programming. Together, they hope to pursue future projects such as coordinating art fairs abroad and inviting noteworthy curators to organize exhibitions at Heron Arts.

“What every artist wants is a room where they can build things and do their work,” Wayne White says. Heron Arts hopes to be a pioneer in rebuilding opportunities for San Francisco’s increasingly threatened art scene to allow local artists to do just that.